(RNS) — Afghanistan is the most dangerous country for Christians, according to an annual list put together by the Christian watchdog group Open Doors. It is the first time in two decades that North Korea has not been at the top of the list.

Open Doors said the Taliban’s takeover of the Afghan government in mid-August forced many Afghan Christians — most of whom are converts from Islam — to go into hiding.

“This proved a game-changer not only for women and ethnic minorities, but also for religious minorities, including Christian converts, who are seen as apostates,” said the organization’s annual report, released Wednesday (Jan. 19). “With the Taliban’s grip on power growing stronger and reaching into more and more districts, the situation for Christian converts is becoming increasingly challenging.”

Overall, no new countries appeared in Open Doors’ top 10 most dangerous countries for Christians. Afghanistan was second on the list last year.

North Korea is now listed second, though its persecution score increased slightly, based in part on a rise in the arrests of Christians and the closings of house churches. The country also adopted a new law countering “reactionary thought” that bars the Bible among “foreign published materials.”

Across the globe, Open Doors found that there has been a 24% increase in Christians killed because of their faith, increasing from 4,761 cited in its report last year to 5,898 this year.

Nigeria, for the second year in a row, was named as the country where Christians are subject to the most violence. It was cited for 79% of the recorded killings, or 4,650.

The number of churches attacked worldwide also increased to 5,110 for 2022, compared with 4,488 the previous year.

Open Doors has worked for more than six decades to help persecuted Christians in some five dozen countries.

The 2022 World Watch List is based on a reporting period from November 2020 through September 2021. 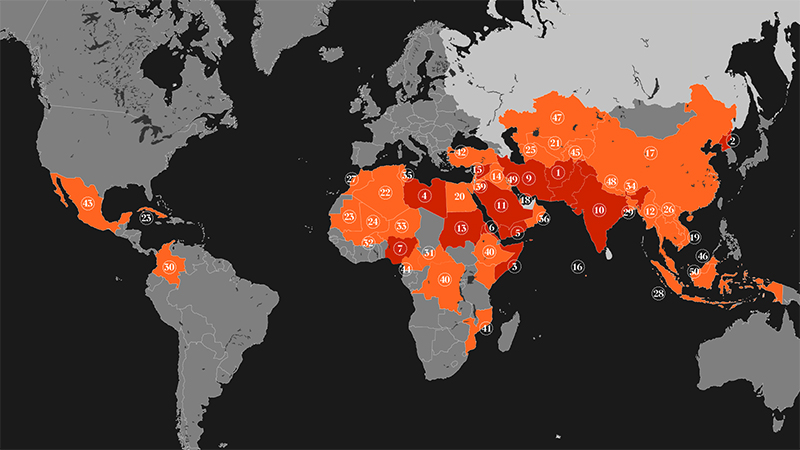 Last year, Open Doors reported that governments and extremists used the COVID-19 pandemic as justification for persecution. For example, in India, the watchdog reported that 80% of Christians in India who received pandemic aid from its partner organizations said they were turned away from other food distribution points because of their faith.

The new report found that China was among the countries where COVID-19 restrictions were used to tighten surveillance and control of worship services and religious minorities.

A number of the countries on Open Doors’ watch list — China, Eritrea, Iran, North Korea and Pakistan — are on the State Department’s list of “countries of particular concern.”

Another watchdog, the U.S. Commission on International Religious Freedom, recommended in April that Afghanistan be placed on the State Department’s second-tier “special watch list” but the State Department did not include the predominantly Muslim country when it announced its designations in November.