LOS ANGELES (RNS) — This past weekend, a crowd of several thousand assembled in downtown Los Angeles to meditate. They carried drums and hula hoops and wore feathers and face paint. One shirtless man circled, waving a smoky bundle of sage, while another provided blasts on a huge Tibetan horn. Some lay on their backs, others rocked to and fro, mouthing silent prayers.

A woman sat lotus-position on an elevated stage, flanked by geodes, offering a bit of instruction. “You are a true love warrior,” she said to the assembly.

Then, continuing with a singsong timbre: “Feel the consciousness of humanity evolving, we-volving, together as this lovely energy grows, creating a giant heart-wave that ripples across the planet, inspiring a we-volution of heart-centered consciousness.”

She whispered wordlessly into the microphone, “Shwoo-oooo-shwoo-oooo.”

This ceremony was the pièce de résistance of an event known as DisclosureFest, an annual daylong gathering at Los Angeles State Historic Park that staggered back to life Saturday (June 18) after two years of pandemic ruptures. The event is equal parts musical carnival, mystic be-in and merchandise swap meet. And, held in this fertile crescent of spiritual curiosity-seeking, it offers a pulse on the shifting moods and appetites of the freewheeling New Age marketplace. 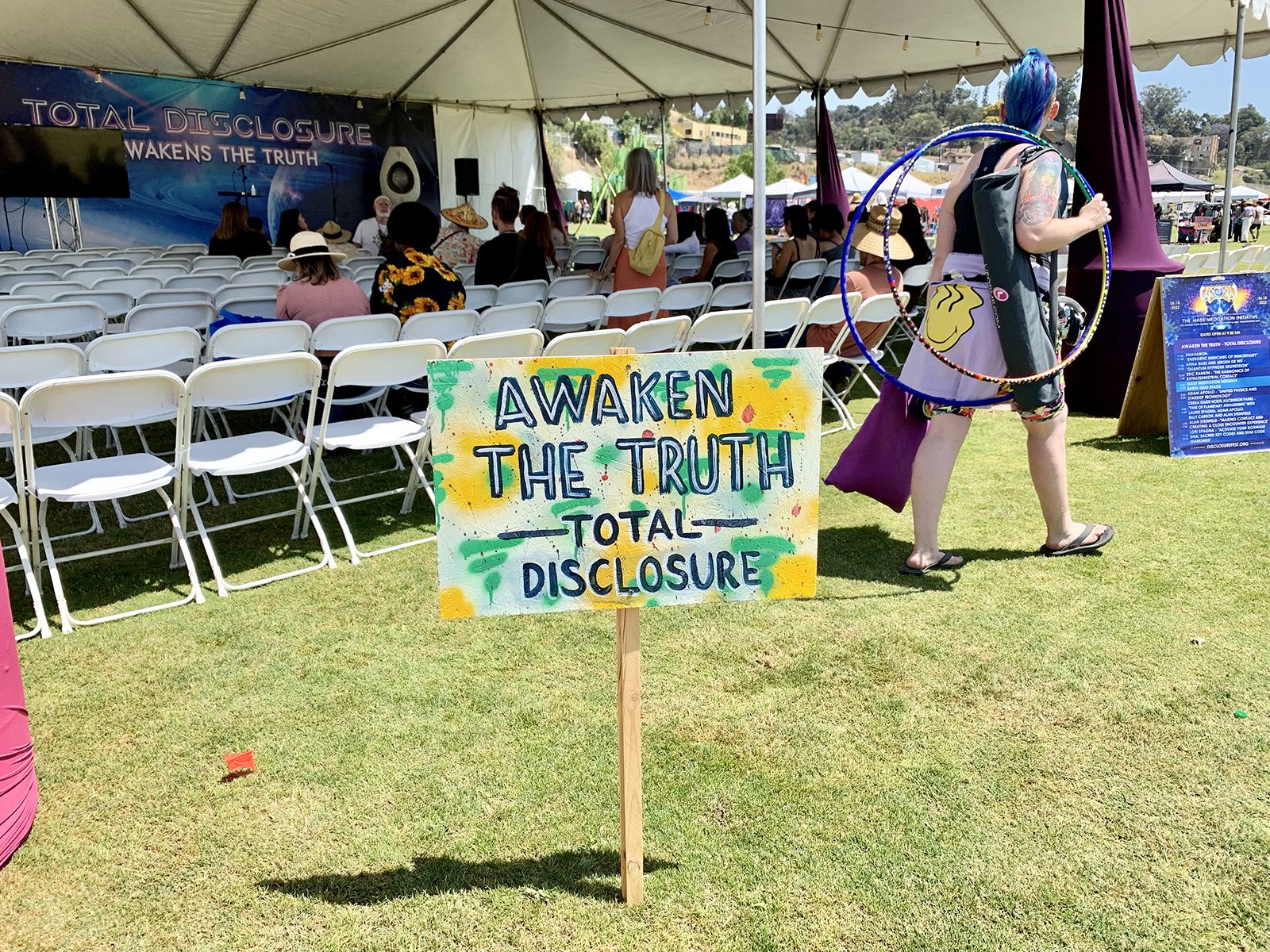 An attendee carries hula hoops and a yoga mat past a session at DisclosureFest,  June 18, 2022, at Los Angeles State Historic Park. Photo by Sam Kestenbaum

At the close of the ritual, a man named Joshua Zain cradled a plastic tub of stones for purchase, labeled as crystals from the lost civilization of Lemuria. “Put your hands on them,” he offered, “and feel what speaks to you.”

Musical acts and DJs performed throughout the day, and themed tents were scattered about, under which speakers held forth on topics such as geodesic domes, healing herbs and cosmic star-gates. At one, Eric Rankin, a radio host and Ancient Aliens guest, stood on stage barefoot in front of a Casio keyboard.

He evoked the writer Joseph Campbell and dolphin communiqués before describing harmonic patterns that he believed were seeded around the world long ago by extraterrestrials. “These sky visitors gave us keys and codes and clues,” he said.

Then he plopped his hands down on the keys. A jarring sound issued forth. “You’ve never heard that chord before.” 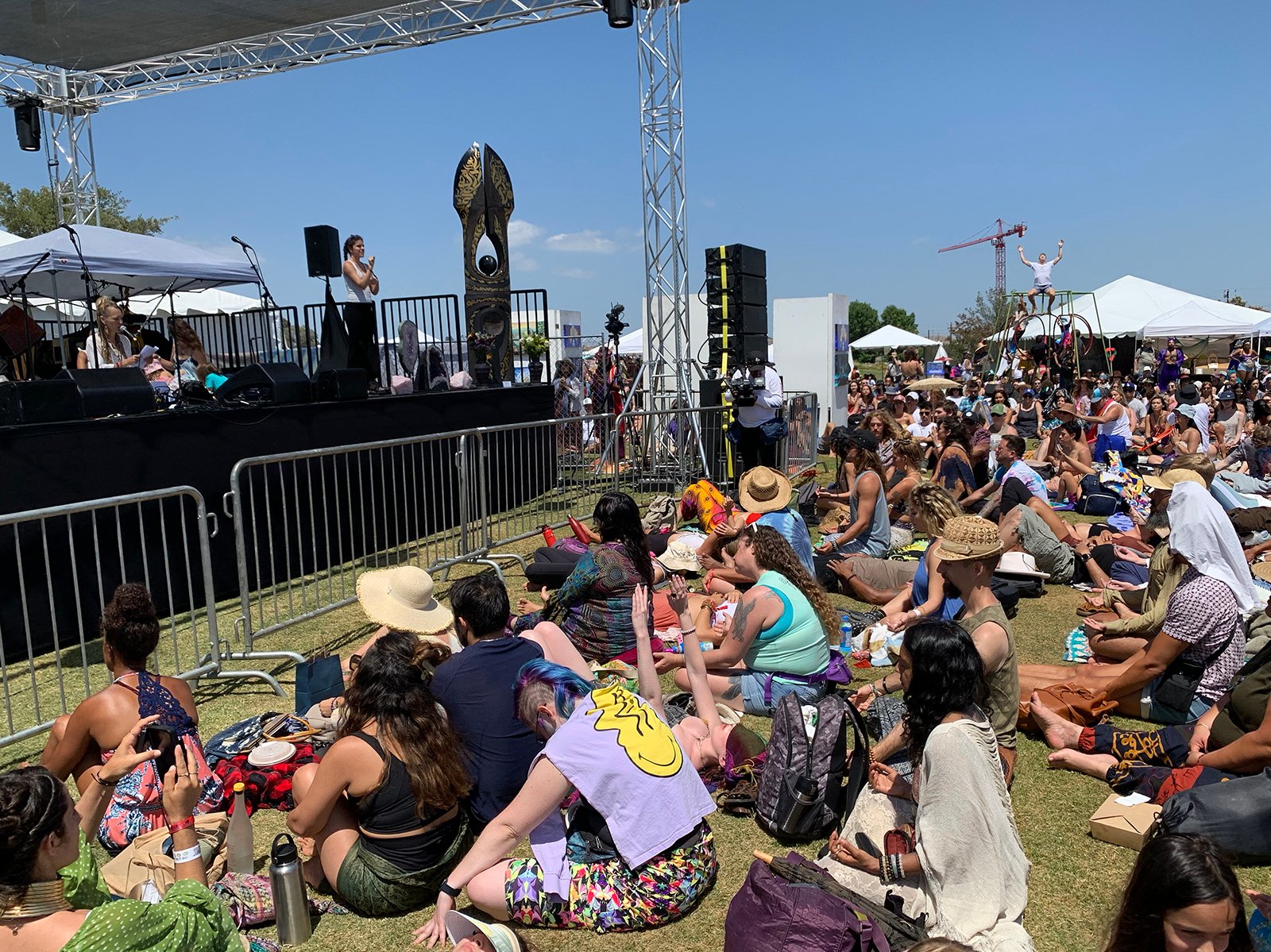 The main event, billed as the Mass Meditation Initiative, commenced in the heat of early afternoon. Such synchronous rituals, advertised as ushering in demonstrable changes in the world, have numerous precedents among New Agers and their spiritual forebears. In the 1930s, the mail-order New Thought group Psychiana recruited members in a campaign to bring about the downfall of Adolf Hitler through daily affirmation and visualization. Transcendental Meditation rose to popularity in the 1960s and ’70s and made claims of quantifiable crime reduction through mantra recitation. In 1987, a global campaign called the Harmonic Convergence captured headlines and drew record-bursting crowds to places like Stonehenge and Machu Picchu to usher in a new era of bliss through communal sunrise watching.

One of DisclosureFest’s claims to fame, included in video montages of its inaugural meeting, in 2017, is that mysterious lights materialized overhead with the help of a professional UFO-summoner.

Star Sansader, a poet in attendance, recalled that occurrence fondly. Did he think they would return this year? “I would like them to land, and I’d say, ‘Give me a free ride to a paradise planet.’”

RELATED: For UFO enthusiasts at Oregon festival, ‘it’s all extraterrestrial’ The festival is the brainchild of a former concert promoter named Adrian Vallera, who says he received a celestial instruction to launch the nonprofit that puts on the fairs, and which has grown to organize neighborhood cleanups, soup kitchens and youth workshops. The group meditation theme varies each year, delivered via more spirit inspiration to Vallera. (This season’s: “Healing all timelines by tapping into our pure inner child.”)

Vallera believes that a portion of attendees are metaphysical newbies when they walk in the gate, and he prides himself on reports he receives of lives transformed here. He appraised, “People are really activating their dormant ascension keys.”

The coronavirus years have taken a toll on the New Age circuit. As the virus numbers rose in the summer of 2020, DisclosureFest shuttered in-person and held an online version. In 2021, it held a limited-capacity version at a private site. (This year, in a first, the event charged an entrance fee starting at $55.) Meanwhile, QAnon and related conspiracy theories have circulated, blending harmoniously into a milieu where claims of esoteric knowledge are the coin of the realm. Scores of wellness influencers and microcelebrities have urged fans to seek health within and avoid the vaccine at all costs.

The pandemic remained a motif at this year’s DisclosureFest, as presenters wove themes about COVID-19 into their talks. A speaker named Lori Spagna (credentials: “Warrior of Consciousness, Bridger of Time-Space-Dimensions-Realities, Connector of All That Is”) stood under one tent and lectured, dueling with the sounds of Bob Marley drifting over from a nearby dance session.

Spagna moved to the topic of vaccines and testing. She said, “What do you think a swab of the nose is for? DNA harvesting.”

…Don’t worry, about a thing…

“A jab is designed to disrupt your natural immunity,” she went on.

…Every little thing, gonna be alright…

“You already have everything you need,” Spagna said, raising her voice. “Only a vibration away.”

Organizers said participants in past years have risen to 20,000. This year drew only a fraction of that — Vallera estimated between 6,000 and 8,000 — but business was still humming. Among the dozens of tables: Etheric Body Work (“$2 minute”); Crystal Enhancements (“crystalline energies align to your matrix”); BioHarmonic Technologies (“change your vibe, change your life”); iPyramids (“quantum vortex therapeutics”); Emerald Orgone (“Protects the aura and subtle bodies”) or Sacred Spirit Services (“channeled oracle readings”). 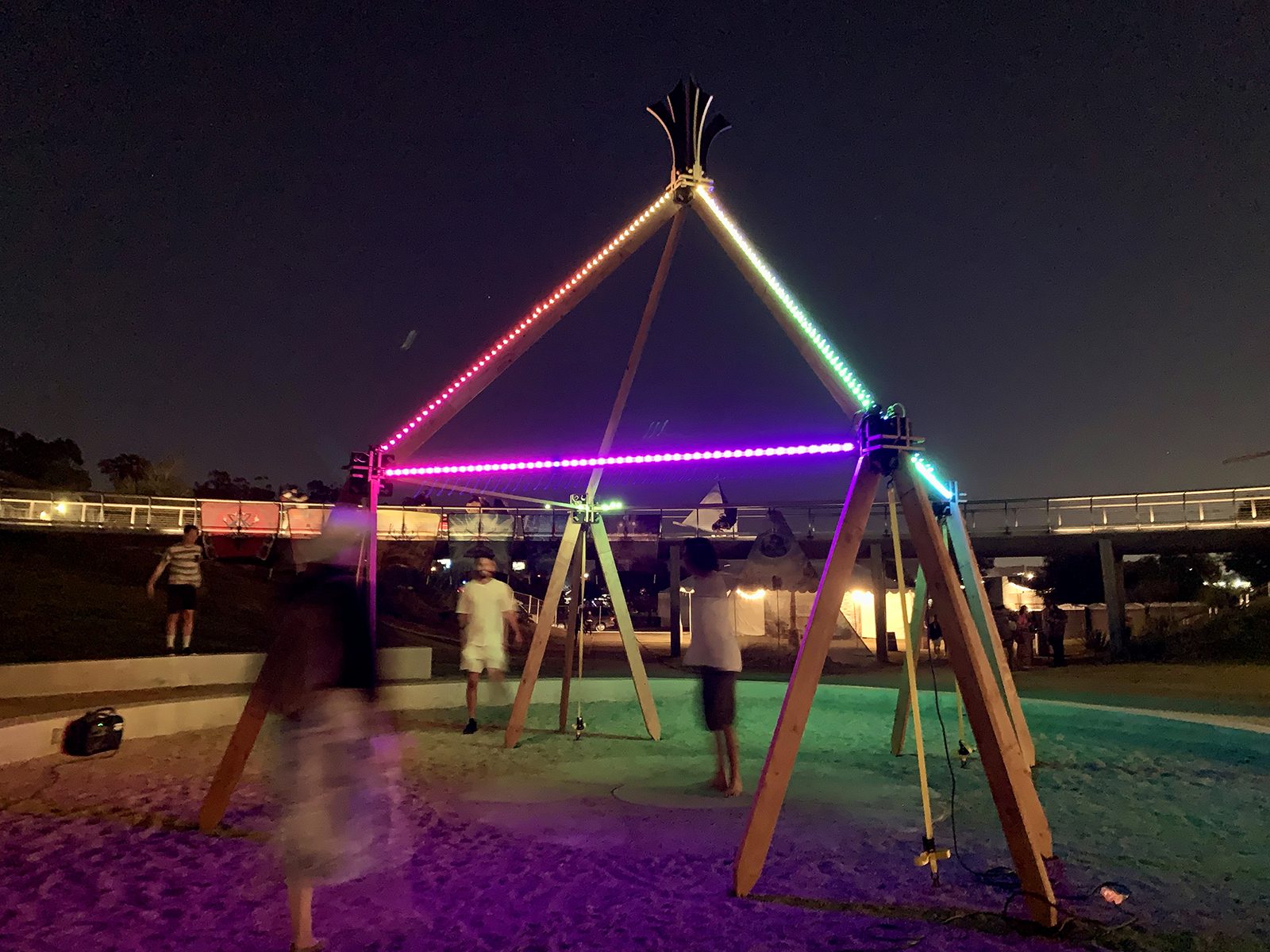 Greta Foster waited patiently at her stand, labeled Pineal Activation, selling sessions in a pulsating light contraption said to evoke visionary experiences, including one option called Angelic Bliss Journey. Having completed one treatment, a blond woman named Melissa Hope rose from the machine and took a halting step. She said, “I saw fractals and patterns and it was like I was inside them.”

As the sun set, the crowd thinned and most merchants packed up. No ships appeared in the darkened sky, but some vendors switched on lamps to light the way. Near the exit, a vaudeville act with a rapping puppet performed for the stragglers, who bobbed and twirled to the music.

“I just love consciousness events,” a performer said. “You guys are on it.”