(The Conversation) — Is digital Buddhism, which includes computer-assisted practices such as listening to podcasts and using meditation applications apps, authentic?

Some scholars have argued that digital Buddhism epitomizes Western appropriation and dilution of traditional Asian practices. Others such as the Slovenian cultural critic Slavoj Žižek perceive it as embodying the spirit of late capitalism. Žižek argues that like Karl Marx’s notion of religion as the opiate of the people, meditation apps are a way for people to feel good, but does nothing to change the economic relationships that are causing suffering.

My curiosity about the authenticity of digital Buddhism was whetted on a recent turbulent flight. Most of the passengers seemed nervous. The person in front of me, however, was calm, even blissful. Looking over their shoulder, I could see they were wearing earbuds connected to an iPhone whose screen displayed a Buddhist-inspired meditation app. Could this be considered an authentic practice?

As a scholar of both digital religion and Buddhism, I hold that authenticity is not determined by its strict adherence to older forms. Rather, an authentic practice furthers a happiness founded on deeper meanings, whereas an inauthentic practice may only provide fleeting pleasure or temporary relief.

Scholars who deem digital Buddhism inauthentic generally point to one of three reasons.

First, some scholars argue that online Buddhism differs from earlier forms – if not in message then at least in the way it is transmitted.

Second, some dismiss digital Buddhism as mere popular consumerism that takes historically rich and complex traditions and selectively repackages them for monetary gain.

Finally, most often, they’ll say that digital Buddhism is often seen as the most virulent form of Western popular culture’s appropriation of Asian traditions. As religion scholar Jane Iwamura argues in her book “Virtual Orientalism,” this obscures the voices of actual Buddhists of Asian descent.

The true nature of happiness

In the end, these all may be legitimate concerns. Nevertheless, these scholars do not address many Western Buddhists’ deep desire for an intense spiritual experience. In my research, many
Western Buddhists have often described their religious practice as a “search for authenticity.”

To understand what they mean by authenticity, we need to look at the Greek philosophical terms “hedonic” and “eudaimonic.”

The hedonic concept dates back to the ancient Greek philosopher Aristippus of Cyrene, who argued that the ultimate goal of life ought to be to maximize pleasure.

Current popular culture centers on hedonic happiness, which values an outgoing, social, joyous view of life. As a result, much of the Buddhist-inspired media currently found on meditation apps peddle moments of personal bliss, calm and relaxation.

Most forms of Buddhism hold there is nothing inherently wrong with pleasure, but that it is not the key to happiness. For instance, Buddhist texts such as the second century “Buddhacharita,” which describes the Buddha’s early life as a pampered prince, preach the ultimate shortcomings of a hedonistic lifestyle. Legend has it that Siddhartha Gautama renounced his worldly lifestyle as empty of meaning, sought enlightenment and ultimately awakened to become the Buddha.

On the other hand, eudaimonic happiness adds meaning and purpose. Eudaimonia means the condition of “good spirit,” which is commonly translated as “human flourishing.” For Aristotle, eudaimonia is the highest end, and all subordinate goals – health, wealth and other such resources – are sought because they promote living well. He insists that there are virtuous pleasures besides those of the senses and that the best pleasures are experienced by virtuous people who find happiness in deeper meanings. 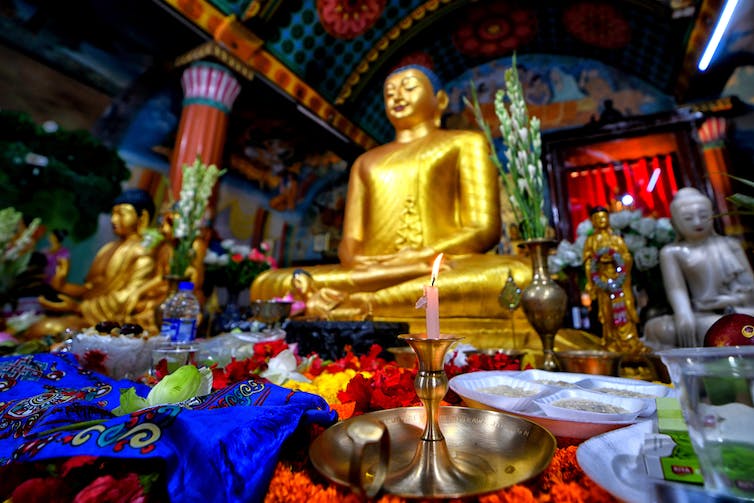 The goal of Buddhist ethics is to lead a person toward enlightenment.
Avishek Das/SOPA Images/LightRocket via Getty Images

He writes that Buddhist ethics rests upon the cultivation of virtue for the goal of enlightenment and that the English word “virtue” can be used as an umbrella term for embracing the numerous individual Buddhist virtues such as compassion, generosity and courage.

Keown makes evident that in Buddhism, the cultivation of eudaimonic happiness, if not sufficient, is necessary for supporting a good life and that it is concern for the welfare of others, both human and nonhuman, that leads to a happy life worth living.

What is authentic practice?

It was not surprising to find a person using digital Buddhism on a turbulent flight. Yet, I wondered, was this just a stopgap to sooth an uncomfortable situation, or an authentic practice?

Buddhism has been modified and translated into new cultures wherever it has spread. Also, no doubt, online Western Buddhism shows that it has been translated to fit into our consumer society.

However, as I show in my 2017 book, “Cyber Zen: Imagining Authentic Buddhist Identity, Community, and Practices in the Virtual World of Second Life,” behind the exotic media stereotypes of online practitioners, often uncritically perpetuated by some academics, lies a largely unexamined territory of popular forms of authentic religious practice. Although virtual and usually performed by middle-class white adherents, these are real people engaging in real spiritual practices that add eudaimonia to their lives.

Still, not all online Buddhist practices are the same. Most of all, one needs to be mindful of appropriating and diluting traditional Asian practices. Moreover, as I found in my research, some digital religious practices resonate with the good life, and some are just a hedonic treadmill entangling users further in their desires.

If digital Buddhist practice approaches the good life as eudaimonic — as leading to human flourishing based on the pursuit of a deeper meaning — it can be judged to be authentic. An inauthentic practice is one that just furthers hedonism by merely peddling bliss and relaxation.

(Gregory Grieve heads the religious studies department at the University of North Carolina – Greensboro. The views expressed in this commentary do not necessarily reflect those of Religion News Service.)