(RNS) — Last week, the California State University board of trustees ratified a collective bargaining agreement that added the category of “caste” to the nondiscrimination clause in all faculty contracts. The vote came despite a petition signed by close to 90 CSU faculty members of all races, ethnicities and religions opposing the move (including co-authors of this article) and after a contentious public comment period in which many detailed how this new policy, which will uniquely apply to South Asians alone, was dividing a minority community.

CSU now recognizes a novel protected class, “caste,” even though the category has no scholarly consensus as to its meaning, no outward markers, no accepted nomenclature nor validated research showing widespread discrimination.

CSU policy now includes a term that exclusively applies to and polices only brown folks of Indian and South Asian descent, comprising just 1.3% of the U.S. population, and who are stereotypically and falsely assumed to define themselves by caste.

Since the vote, we have been inundated with threats and hateful comments on social media for opposing the policy change. They boldface our last names to infer caste identity and status, always inaccurately (last names may but aren’t always associated with any one “caste” or community). They label us bigots, dox us and demand that the names of all signatories on our petition be publicly revealed. We didn’t reveal the list, which includes tenured and nontenured faculty representing every national origin, race and religious background and none, to protect them from precisely these kinds of attacks.

We are mocked in cartoons falsely alleging that our opposition to the CSU vote is rooted in a religious compunction to discriminate against our colleagues and students.

All of this is because we are speaking out against an unlawful, facially discriminatory step targeting us as members of an ethnic minority community, and because we are committed to pursuing all legal avenues to protect our constitutionally guaranteed rights to equal protection and due process.

Our opposition to the addition of caste is predicated on the simple fact that existing laws and CSU policy already prohibit discrimination on the basis of national origin and ancestry. As the Hindu American Foundation has argued in court filings, though there is no agreement as to what caste entails, these existing categories already cover many of the characteristics considered to be associated with caste, including actual or perceived birthplace, ethnicity, descent, culture or language. 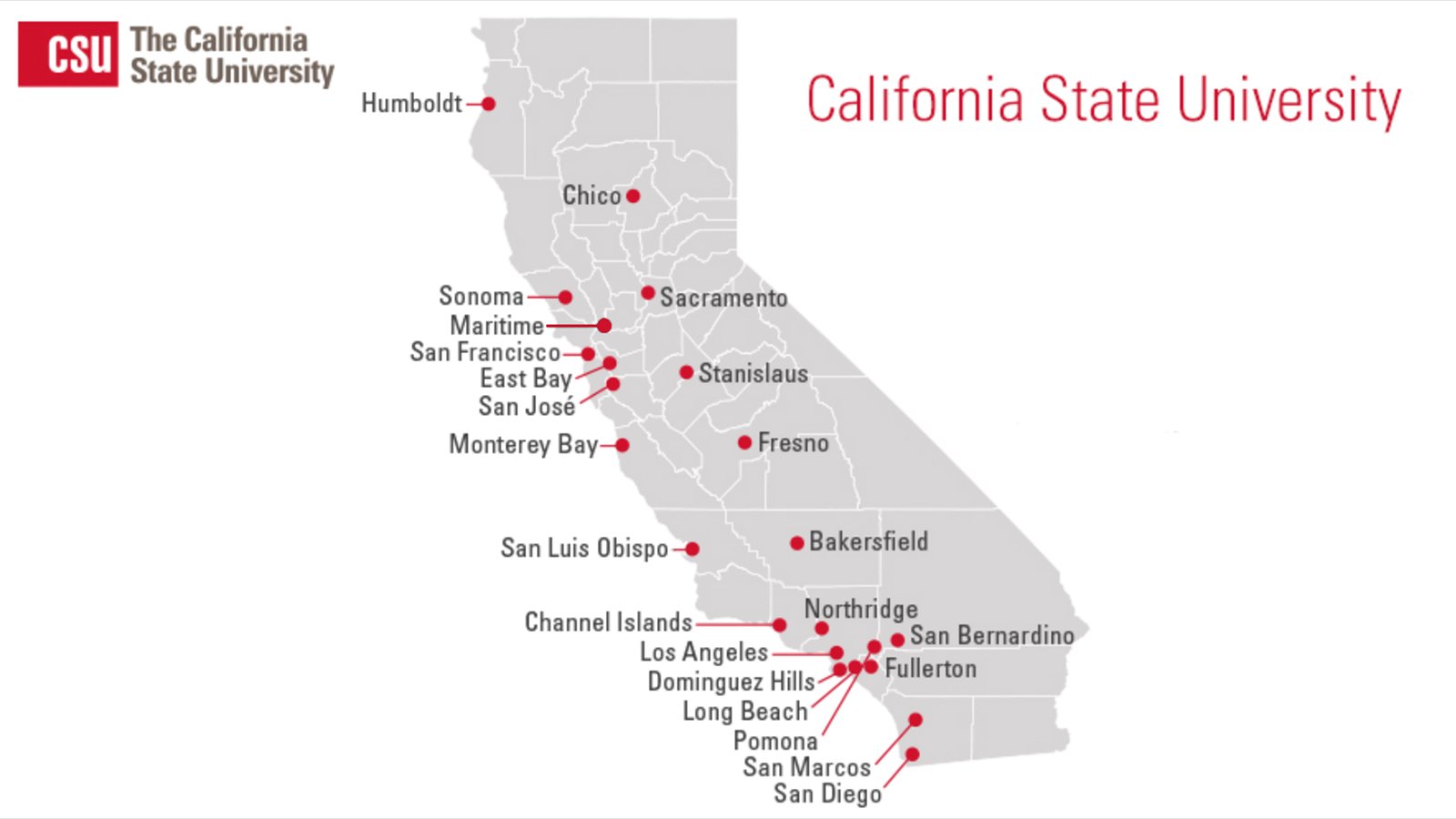 The 23 campuses of the California State University system. Graphic courtesy of CSU

Since caste could be claimed under any one of these generally applicable classes, adding a stand-alone category that is ascribed exclusively to Indians and, to a greater extent, Hindus, is discriminatory on its face.

As any law student knows, a law is facially discriminatory when it singles out a group to identify the people to which the rule exclusively applies. No further proof is needed that discrimination is at work. A requirement that all teaching assistants of Asian or Middle Eastern descent must undergo accent reduction training, for example, would be facially discriminatory.

As Hindus informed by teachings like samadrishti (equal regard for all beings), and as ethnic and religious minorities in the United States who have experienced discrimination personally, we have long opposed all forms of prejudice and discrimination, including on the basis of caste or community, and fought against them.

We also know that prejudice and discrimination on the basis of various perceived social differences exist in the Indian subcontinent, as in any human society, among all religious communities. Their existence is in contradiction to the teachings of dharma traditions rooted there — that the Divine is equally present in all beings, which in turn invokes universal duties of respect, noninjury and selflessness.

Consider this: The largest study of Indian American attitudes ever completed, Carnegie Endowment and YouGov’s nationally representative online survey of 1,200 Indian American residents in the United States in 2021, found that the majority of those surveyed reported identifying with no caste at all.

Moreover, while 50% of Indian Americans reported facing discrimination on the basis of color, religion and gender, only 5% reported experiencing caste discrimination. And that discrimination was reported to be perpetrated equally by other Indians and non-Indians, underscoring how difficult caste is to define.

In supporting the insertion of “caste” by CSU, academics and activists cite a single, nonscientific survey by Equality Labs, a survey that not only did not utilize a representative or randomized sample, but threw out the responses of those who did not identify with or reveal a caste. To this, the Carnegie Endowment study provides a remarkable rejoinder:

“(Equality Labs) relied on a nonrepresentative snowball sampling method to recruit respondents. Furthermore, respondents who did not disclose a caste identity were dropped from the data set. Therefore, it is likely that the sample does not fully represent the South Asian American population and could skew it in favor of those who have strong views about caste.”

The activists who prevailed upon CSU to include caste insisted first that caste is intrinsic to the Hindu tradition by falsely stating that Hindu origin myths rank different people hierarchically according to ritual status, purity and occupation, among other things. That’s incorrect. Then the activists insisted that discrimination based on caste is widespread in the United States. That’s also incorrect. It is reported by 0.07% of all Americans. Then the activists said a new category is required to provide protection. It isn’t. Existing, facially neutral categories can cover caste.

So the CSU policy change transpired despite the fact that those responsible for adding caste could not offer evidence of a single complaint having been filed on any of CSU’s 23 campuses. Nor could they provide evidence of existing policies failing to provide redress to any such complaints.

The solution to those rare acts of caste discrimination is to educate all students and faculty on the strong and comprehensive policy that was already in place, and how to access the nondiscrimination complaints process on college campuses. Instead, CSU chose to render all South Asians, and specifically members of the Indian diaspora like us, as an inherently bigoted, suspect class that requires a special anti-discrimination category.

Since prejudice is common among all human societies, prominent observers criticize the CSU move, questioning whether CSU will now create more facially discriminatory categories, the Burakumin identity among Japanese, for example, and other categories that specifically target every racial and ethnic group’s respective intragroup identities and social differences.

Despite the avalanche of hate that we are facing, revealing the Hinduphobic milieu from which some of the casteism accusations arise, we know that along with our CSU colleagues staring down this online mob, we remain clear in our convictions and will repose our trust in our legal system.

RELATED: My child learned he was ‘low caste’ from a school textbook: An American Shudra story

Any kind of discrimination is fundamentally wrong, against our moral grounding and the teachings of our traditions and gurus.

But the solution to any problem is not to create a new one.

(Praveen Sinha is a professor of accountancy at California State University, Long Beach. Sunil Kumar is professor of engineering at San Diego State University. Suhag Shukla is executive director of the Hindu American Foundation. The views expressed in this commentary do not necessarily reflect those of Religion News Service.)

Neither Indian or Hindu alone, caste is found across South Asia and the diaspora