(RNS) — Standing outside a church in rural North Carolina this spring, the Rev. William Barber II leaned on his dented and scuffed wooden cane. With one powerful hand he pushed himself up and into the seat of a long black Chevrolet Suburban, then swung his legs in, using the cane, wedged against the door, as a fulcrum. The effort left him out of breath, his expansive chest heaving as he lay back in the seat, reclined to afford him space.

No sooner had an aide closed the door before a man from the church rapped gently on the window.

“Rev. Barber,” he said, “you’ve been a role model, an inspiration.”

Barber found a second wind. He thanked the man and wished him well, grinning widely and giving a thumbs up. As the man walked away, the pastor paused for a beat, dwelling in a small moment of silence before turning to a reporter. 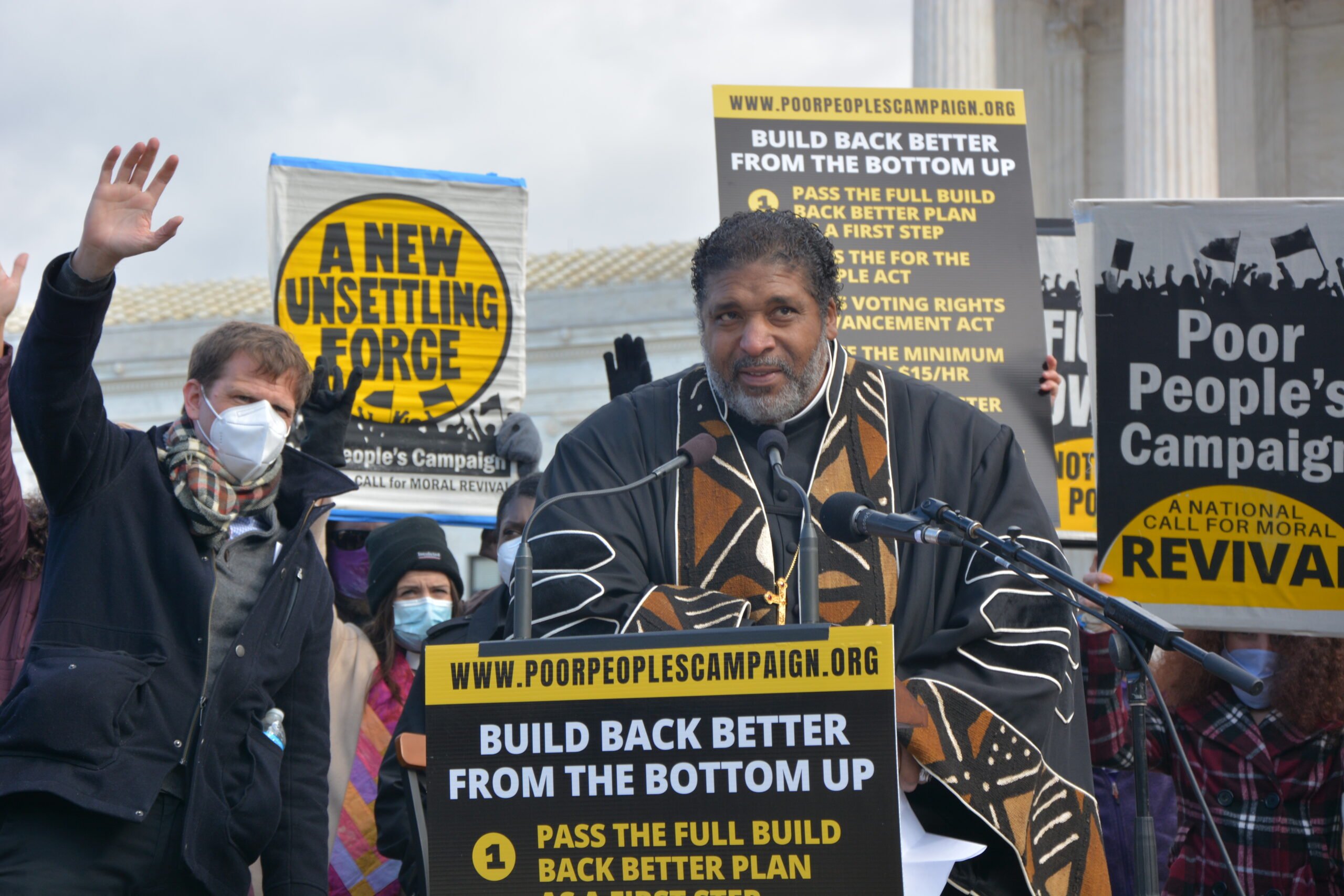 The Rev. William Barber addresses supporters with the Poor People’s Campaign outside the Supreme Court on Nov. 15, 2021, in Washington. RNS photo by Jack Jenkins

“You heard about this report we’ve got coming out … ,” he began, launching into a detailed 20-minute discussion of poverty as the car drove away.

Such is the rhythm of life for Barber, 58, a Disciples of Christ pastor and activist best known as co-chair of the Poor People’s Campaign, an anti-poverty effort bearing the name and the goals of the movement launched by Martin Luther King Jr. shortly before his assassination.

Like King, Barber is lauded for his abilities as an orator and an organizer. He has received standing ovations for his rallying speeches at the Democratic National Convention. He has led some of the largest and most visible direct action protests in recent decades, sometimes leading to his arrest and days behind bars. He huddles with union organizers and fast food workers.

On Saturday (June 18), the Poor People’s Campaign is holding a Mass Poor People’s & Low-Wage Workers’ Assembly & Moral March in Washington, an event mounted, Barber has said, to “shift the moral narrative” in favor of poorer Americans. Hoping to draw as many as 250,000 to Freedom Plaza in the capital, Barber plans to demonstrate the power of low-income people to vote and speak up for their concerns and needs.

Organizing and protesting is hard work that would strain anyone, but Barber has spoken publicly about his battle with a form of arthritis known as ankylosing spondylitis that can lead to, among other things, inflammation and fusion of the spine. Once a burgeoning football star, he moves slowly, aided by his cane and sometimes a coterie of assistants. 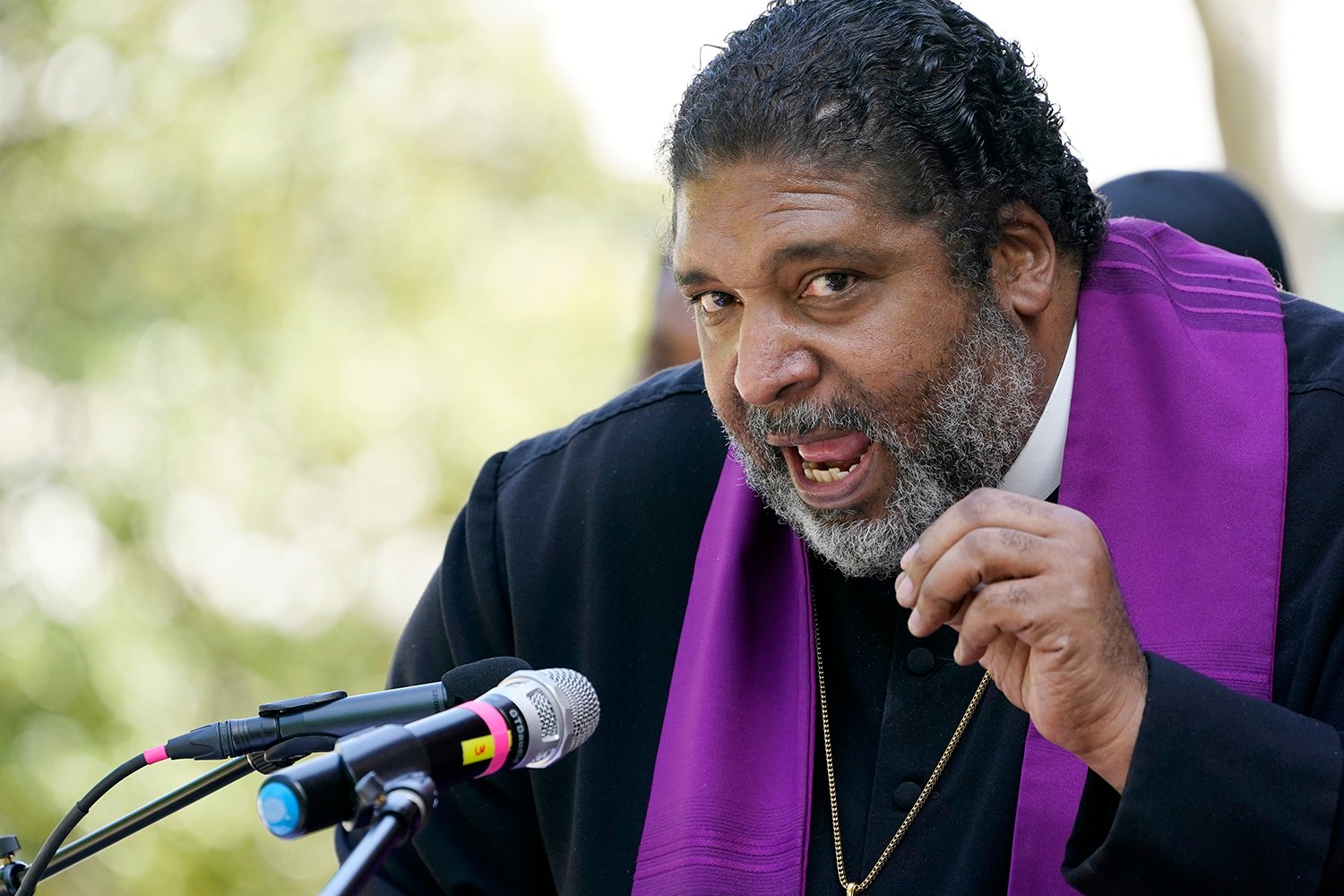 After surviving an unsettling bout of COVID-19 in January, Barber reached out to Religion News Service, saying he wanted to talk about his lifelong struggle with disease. But the conversations that followed turned out to be as much about Barber’s faith, his understanding of community and his focus on his cause. His activism, he said, is accompanied by a theology that is deeply informed by the realities of disability and chronic disease, particularly for the poor.

It also draws from what his religious upbringing told him about body and spirit. “I was taught in my faith tradition that you don’t live life and rust out,” he said. “You wear out.”

At a Sunday morning service in March at St. James Church in Winston, North Carolina, the crowd is waiting for Barber. The guest of honor is the Rev. Della Owens, who oversees safety and security for Repairers of the Breach, another social justice nonprofit Barber founded. Owens, who also occasionally serves as Barber’s driver, is about to be installed as senior minister. 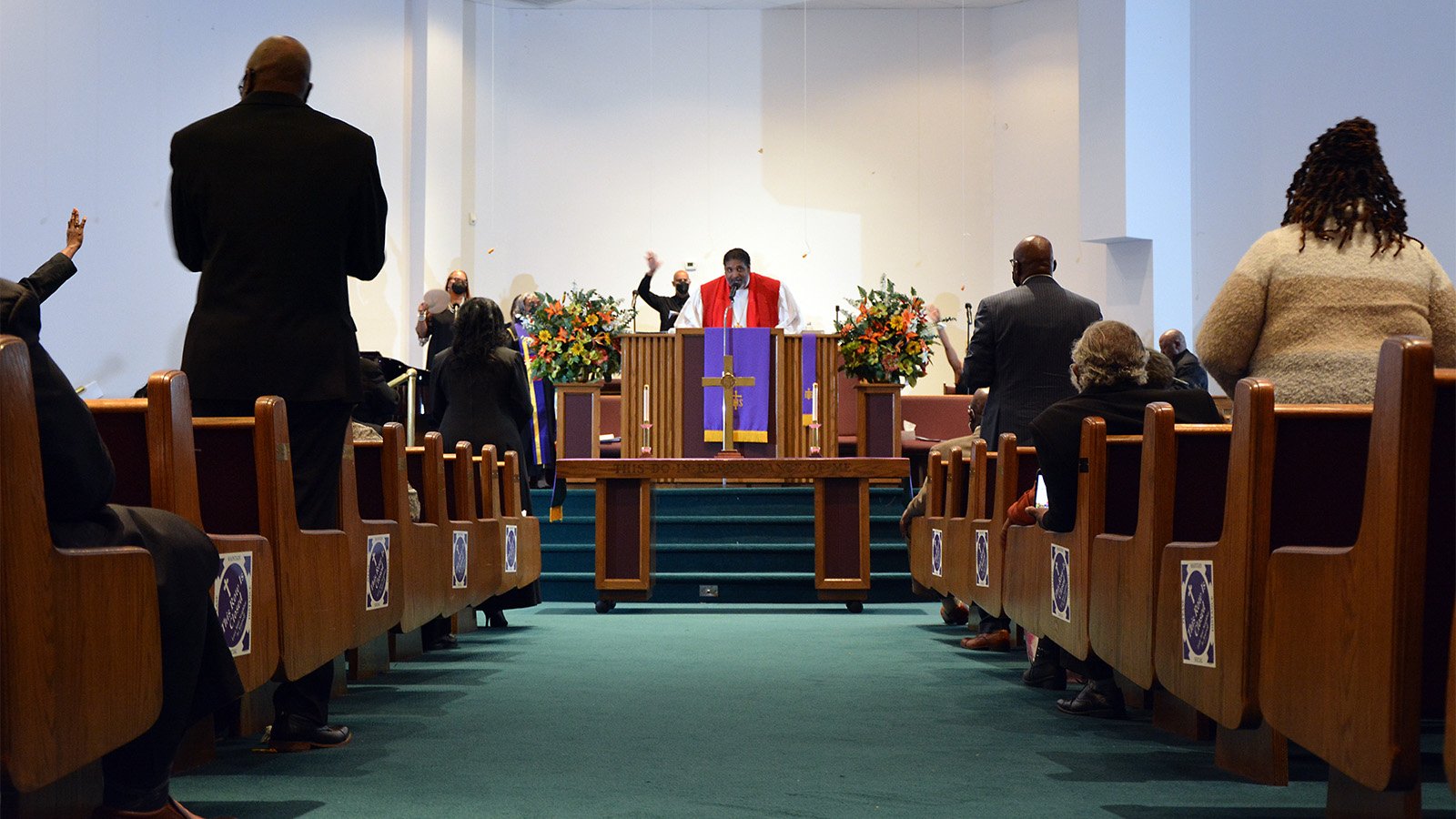 A few minutes later, the congregation came to its feet as Barber processed down the center aisle, the choir braiding the air with a hymn. His sermon, based on the New Testament’s Second and Third Epistles of John, drew a line connecting Owens with biblical figures who were “installed” by God for their own ministries.

Preachers who sing from the pulpit are a class unto themselves; a mellifluous voice is not a prerequisite. Beginning in a bellow, Barber slid into Andrae Crouch’s “Through It All” as the congregation rose to its feet: “In every situation, God gave me the consolation, that my trials come to make me strong.”

Later, sitting back in the car, Barber explained why he was late to St. James. After getting out of bed most mornings, he performs stretching exercises for an hour and a half, sometimes longer.

“What ankylosis does is, it tries to close your chest cavity over time,” Barber said, arms wide to demonstrate one of his exercises. He stretches his back as well, hoping to slow the damage the disease does to his spine. 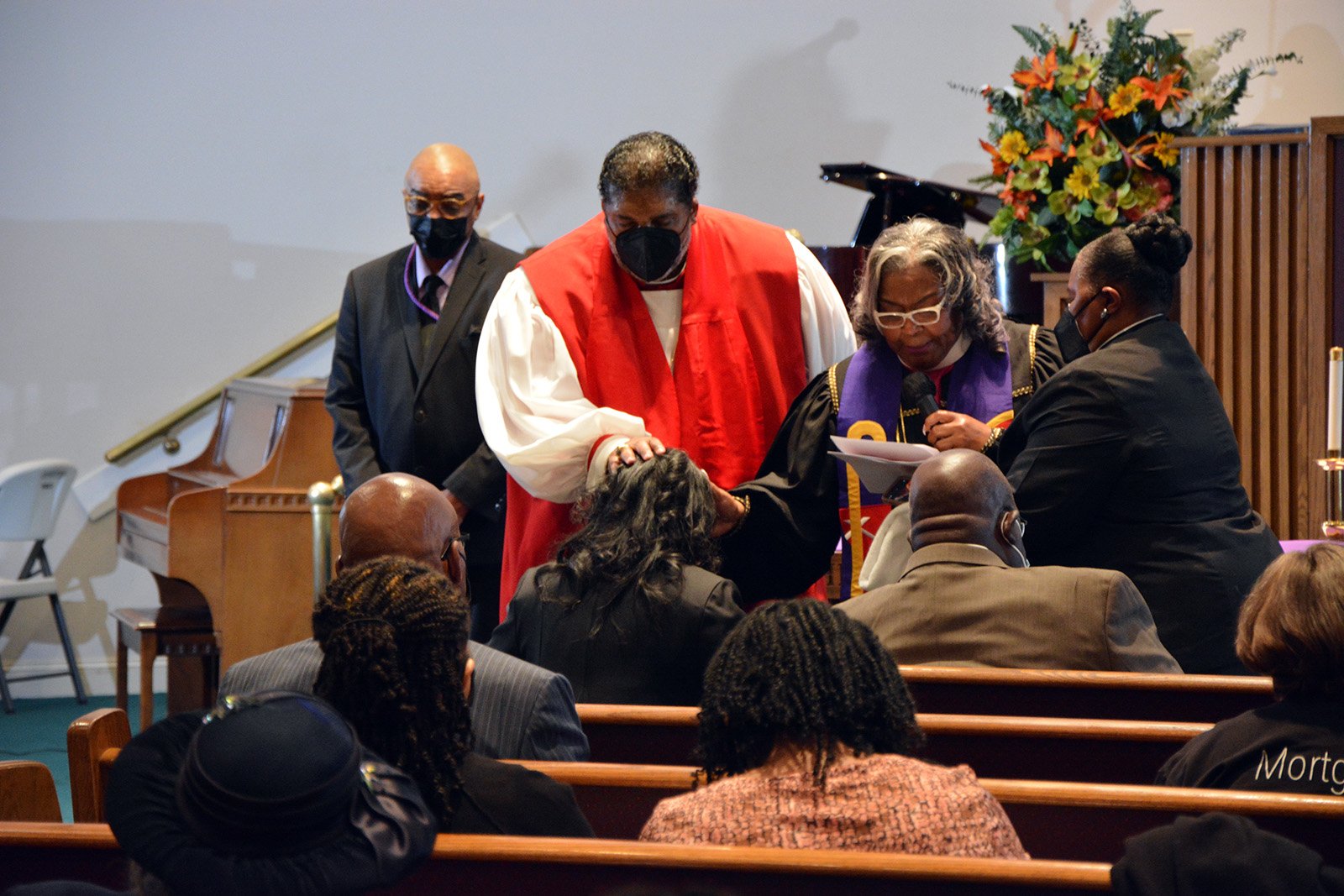 First diagnosed in the early 1990s, his illness is exhausting and often briefly debilitating. Some days his eyes “turn red,” he said, and he loses his vision. Inflammation in his neck, spine and hips causes immense pain throughout his body.

In quieter moments, his low baritone can grow thin and hoarse. His medication can drain his energy. As we were driven around Goldsboro in March, Barber was often animated, gesticulating passionately, but at times he mumbled as his eyelids fluttered. Once, he perked up midsentence, asking if he’d fallen asleep.

Barber’s home congregation is Greenleaf Christian Church, in Goldsboro. Big-name pastors usually run big-name churches, the kind with their own coffee bar and store. Greenleaf, while modern, is small. The nearest business is a Dollar Store across the street.

But Greenleaf’s size belies a much larger vision for ministry, Barber said. He pointed to the Dollar Store as a testament to those efforts, explaining that it appeared only after the church and its partners built a series of homes in the area, as well as a senior citizen complex. They have aspirations to add a center to serve people living with HIV. 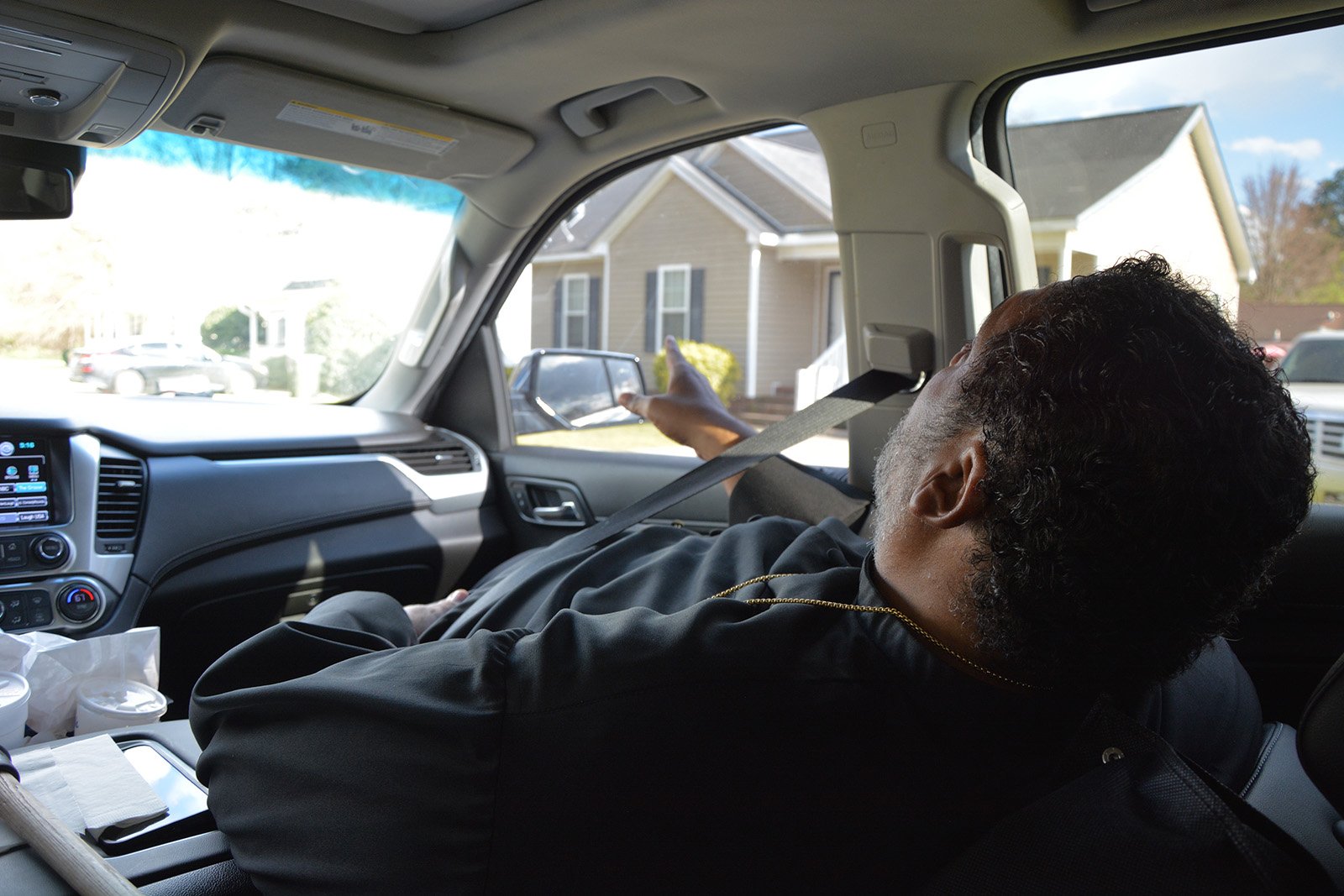 Greenleaf, Barber noted, also embraced him with his health issues. “For 12 years, in this church right here, I was on a walker and in a wheelchair,” he said.

Many of the sermons and speeches he delivers in front of national audiences, he said, are delivered to Greenleaf’s congregation first. “Here is home,” he said, walking past the sanctuary’s stained glass windows. “Here I’m part Pentecostal, part professor. Here, I’m free.”

He grimaces as he talks. Something inside him is acting up, swelling from all the activity. He acknowledges it, then presses on.

He said he found comfort in learning that prominent leaders have suffered their own health issues: Abraham Lincoln and Franklin D. Roosevelt, the activist Fannie Lou Hamer. Biblical figures such as Moses struggled with speech. 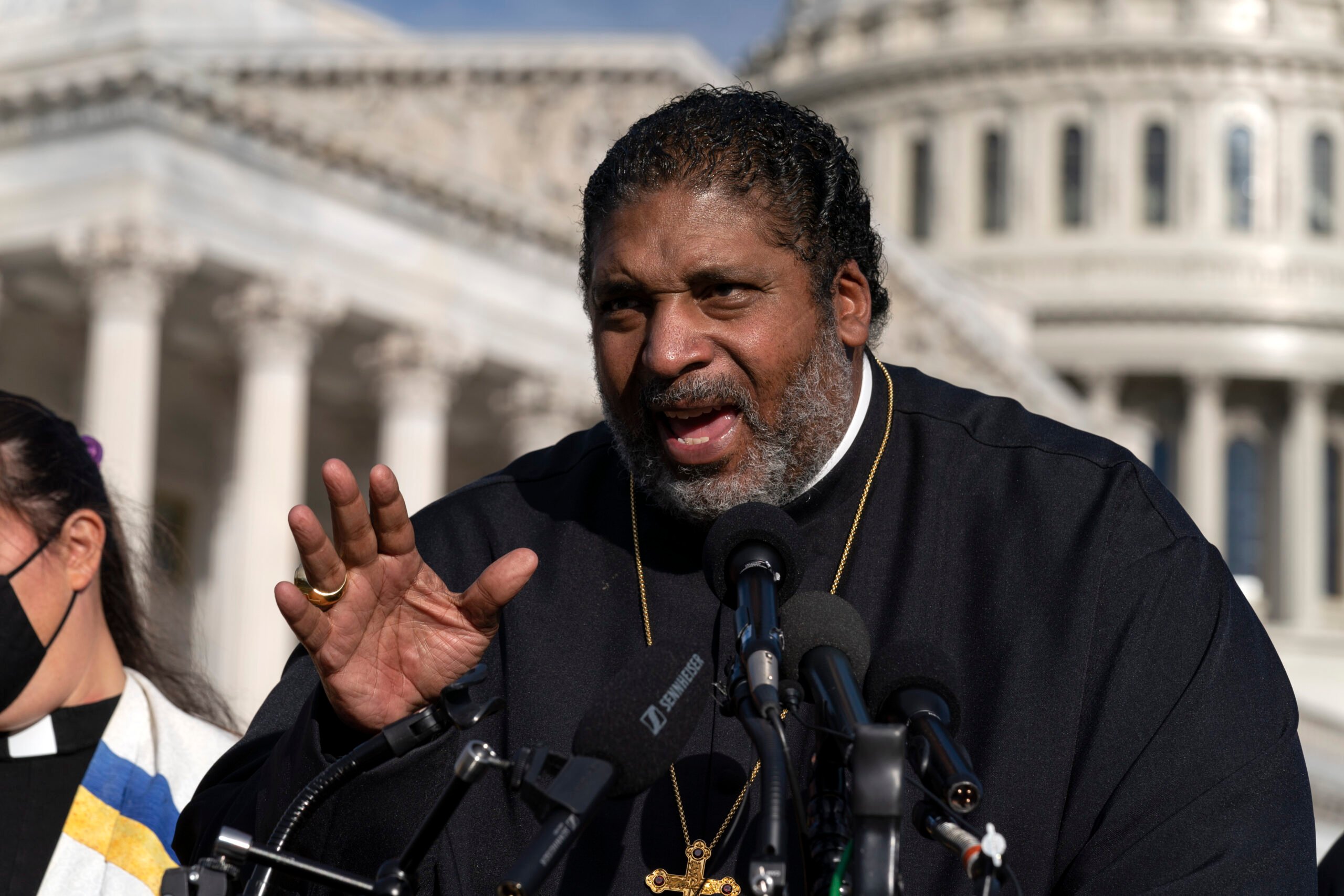 “I don’t know if I’ve got five more years, 25 more years, 50 more years — well, I probably don’t have 50,” he said, laughing. “But I tell you, my commitment for the rest of my life — until I can’t go anymore, if the pain says I can’t, and even then I’m going to find a way to still do something — is to be with those in this country who every day have inflicted upon them the restrictions of a democracy that’s full of the arthritis of inequality. The pain of racism, and classism.”

Barber said his cane is a reminder of where “the movement” has taken him. In recent years, he helped assemble groups to protest the Republican-led effort to repeal the Affordable Care Act. He held a presidential candidates forum in 2019 that drew nine White House hopefuls — including the eventual winning ticket, Joe Biden and Kamala Harris. Barber has led major demonstrations in Arizona, West Virginia and Washington to urge Sens. Joe Manchin and Kyrsten Sinema (unsuccessfully) to pass voting rights bills and eliminate the filibuster.

Barber uses his own health issues, and his adequate health care access, to talk about how many lack it. “I have certain pains, but I can’t imagine what people who have pain and then, on top of that, have to deal with low wealth and lack of health care,” he said.

The next day, at a Poor People’s Campaign event in Raleigh, a prequel to the June 18 march in Washington, several speakers told the crowd of hundreds in Bicentennial Plaza about efforts to unionize Amazon or to raise the federal minimum wage.

When it was Barber’s turn to speak, he rattled off a long list of issues — housing, low wages, Indigenous rights, climate change, immigration reform, religious nationalism and LGBTQ rights. But he was sure to address concern for health care access. He insisted the United States needs a “heart transplant.” 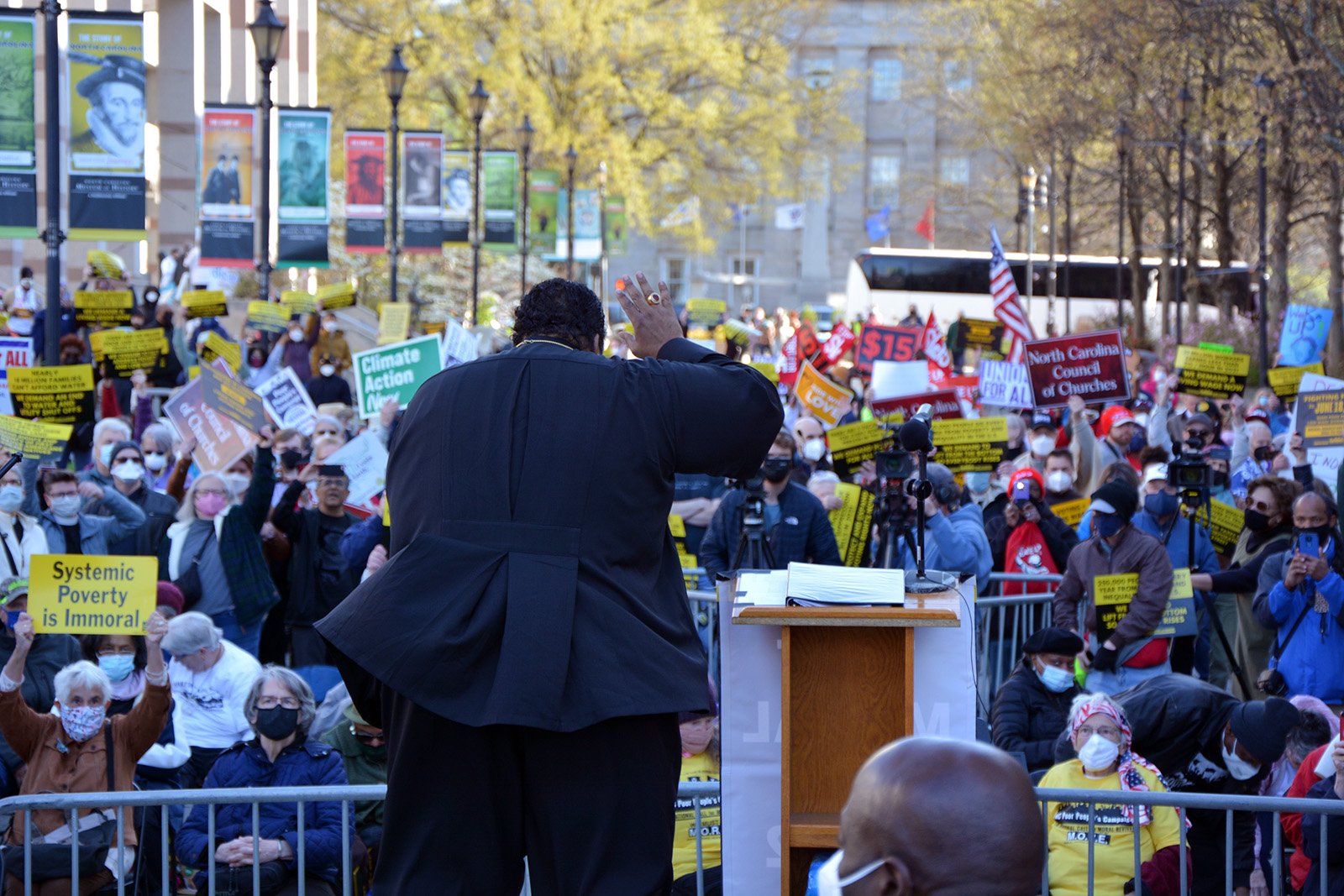 Health and disability are recurring themes at his protests. The great majority of those in the crowd in Raleigh wore masks — an effort to protect immunocompromised people, including Barber himself. Organizers had set up booths that provided free COVID vaccines and rapid tests, catering to attendees and event volunteers alike. The longer one looked, the more one noticed a preponderance of wheelchair users or people on scooters.

When he convened his first “Moral Monday” protests, in which he led thousands to occupy the North Carolina Statehouse grounds to protest then-Gov. Pat McCrory’s policies, in April 2013, among the first batch of demonstrators arrested was a wheelchair user.

“I had a brain aneurysm in 2013,” said Carrol Olinger, who was sitting near the stage. “I had to learn how to walk and talk and start from scratch, and then I had a stroke in June. So when I see (Barber), I feel inspired that I can keep going. Life doesn’t end.”

Olinger expressed frustration about North Carolina’s failure to expand Medicaid. She was conscious of what she called Barber’s “mobility issues.”

The relationship with the disability community has been an evolving one. Joy Weeber, a volunteer at the Poor People Campaign event and a wheelchair user, said that early on in the Moral Mondays movement, the disability community pressed for greater access. Organizers course-corrected, and eventually the activists connected over Barber’s own health concerns. “Of course! We’re all out there fighting for our rights too,” said Weeber. 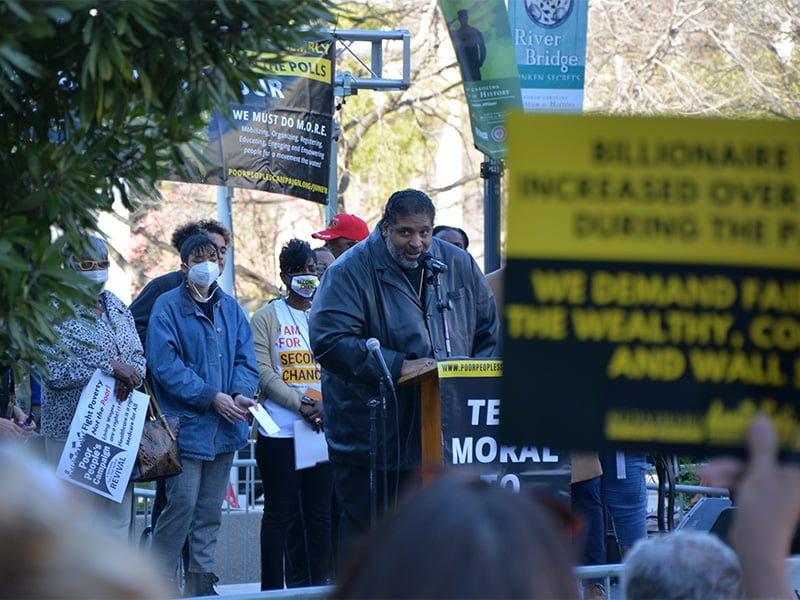 As the event closed, Barber made mention of his health while prodding the crowd to join him in Washington, eight hours away by car, for the June 18 event, slated to be one of the largest assemblies of the Poor People’s Campaign. He called for “a meeting,” something he meant literally and spiritually: He noted that in the Bible, “where there was change, there was a meeting.”

“I don’t know how I’m going to get there,” Barber said from the stage, his voice rising. “I’m getting older now. My knees are hurting. This disease is trying to take my life. But as long as I’ve got breath in my body, I’m going to the meeting!”

Soon, in a signature gesture, he threw his notes to the ground. The crowd erupted, fists, open palms and canes raised in prayer.