(RNS) — In June, as the Ukraine war’s disruption to the world’s food supply looked as if it would become a long-term problem and inflation extended its grip over the global economy, the staff of Buddhist Global Relief, a nonprofit fund for humanitarian food aid across the world, gathered for an online meeting to firm up the list of organizations it will fund for the fiscal year ahead.

With $1.5 million to spend, BGR’s team was considering a slate of 54 worthy projects.

“Yes, 54,” said Carla Prater, a BGR volunteer who was until recently the nonprofit’s assistant director. Now the most significant Buddhist-led humanitarian agency in the United States, BGR began in 2008 with just $20,000 and three small-scale projects in Southeast Asia.

Each year since then, its budget and funding capabilities have grown at a steady rate, but in the past year, just as an unprecedented food crisis has loomed, donors have contributed nearly $500,000.

The significant increase in donations also came just as BGR staffers were reinventing their appeals for money after being forced to pause their annual fundraising event — a walk to end hunger — due to COVID-19. Now, BGR has already provided emergency assistance for projects with extra needs and given all of its grantees a 10% increase as a cushion against food insecurity. 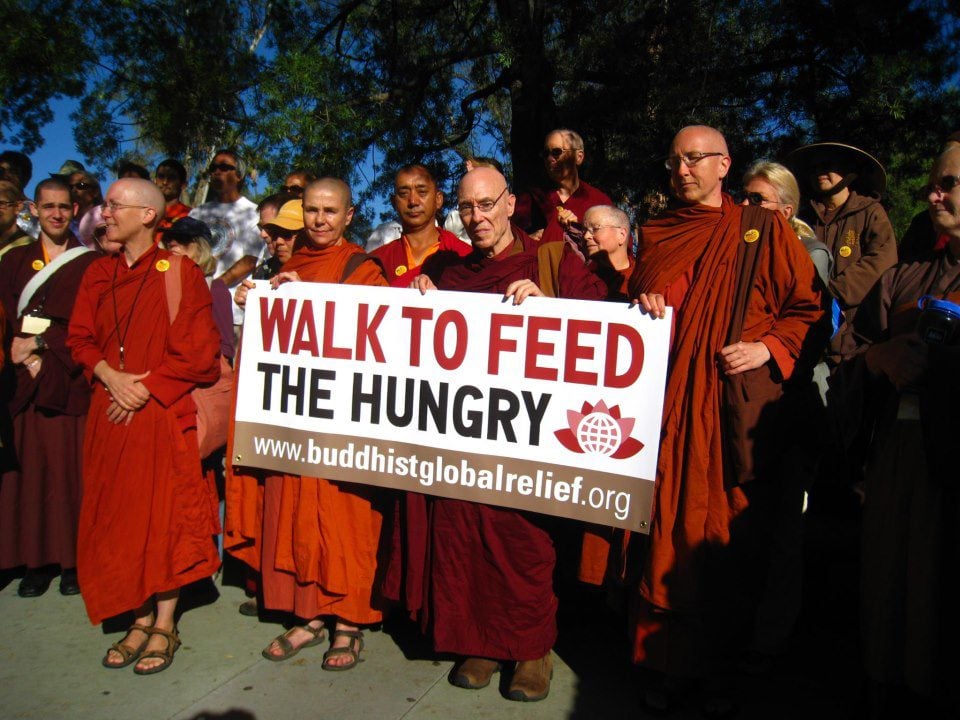 Bhikkhu Bodhi, an American Buddhist monk of the Theravada tradition, calls himself the “indirect” founder of BGR. In 2004, after a tsunami killed more than 270,000 people around the Indian Ocean, Bodhi raised some $160,000 to help the survivors. In 2007, he wrote an essay that appeared in a Buddhist magazine, calling on Western Buddhists to increase their social engagement. The next year, a number of Buddhists of varying lineages were inspired by the essay to start BGR.

The push for Buddhist involvement in worldly causes has been slow moving since the faith’s arrival in the United States in the mid-19th century. The Buddhism that has grown up in the United States over the last century is one generally focused on meditation and personal development. Vocal activists like Bodhi believe that those who practice Buddhism just for themselves are not seeing the whole picture. 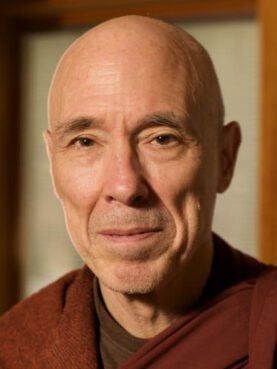 “It’s not enough for Buddhists to just be involved with their own personal cultivation,” Bodhi told Religion News Service in a recent interview. “It’s critically important for Buddhism to take on an engaged role of addressing the suffering that arises from social and economic causes, and even taking on the role of being a voice for social transformation to help create more equitable structures and institutions.”

Kim Behan, executive director of BGR, said the organization’s anti-hunger work is a natural extension of Buddhist principles. “The path of dharma and the path of service are truly complementary. By some causes and conditions, all the work we do for others comes around and blesses us on our own paths. One supports the other.”

While BGR’s work focuses on hunger, it uniquely sees part of that mission as “heavy focus on the livelihood of girls and women,” according to Prater.

Guided by a 2009 Nicholas Kristof column, Bodhi and other BGR leaders realized that education and vocational training of girls and women are key to fighting poverty and, by extension, food insecurity.

RELATED: In Buddhism, women blaze a path but strive for gender equity

Behan, who moved to the U.S. from Vietnam when she was 18, said this foundational principle hits close to home. “I grew up in Vietnam, so I definitely experienced that in the ‘Asian’ culture. Even in my own family, girls are expected to do certain work while boys are set free. There is so much pressure on girls and women in Asia,” she said.

A number of the projects being funded this year aim to alleviate some of that pressure on girls and women. One grantee, the Bodhicitta Foundation, run by Australian bhikkhuni Ayya Yeshe, offers women’s job training, education, and housing for young girls in India. The foundation mainly works with those girls and women held back by the caste system.

BGR is also funding Building Bridges India. Based in New Delhi, Building Bridges financially supports Punjab widows left with the responsibility of running family farms after their husbands’ suicide. Nearly 30 years of poor environmental conditions and economic blows to the region created debt so massive that thousands of farmers have taken their own lives.

A number of factors have worsened conditions for village farmers around the world, said Bodhi. “For one, there is the ongoing COVID-19 pandemic, which has led to interruption of the supply chain,” he said. “Then, food prices are increasing in some countries to such an extent that it’s becoming difficult for people to acquire sufficient food at all.”

With food insecurity now impacting more people than at any time in BGR’s 14-year existence, its newly boosted budget and project list couldn’t have come at a better time. Prater said the staff “couldn’t be more excited for the year ahead.”

Behan said the year ahead is also an opportunity to deepen the group’s “sincerity and honesty” in Buddhist-oriented humanitarian work. “I feel like we threw a stone in the water back in 2008 and the circle just keeps expanding,” Behan said.