(RNS) — On May 31, in the Indian state of Uttar Pradesh, a group of extremist Hindu nationalists broke into the house of a Christian pastor praying with his family. They dragged him from his home and beat him before turning him over to authorities.

Rather than discipline the attackers, the police arrested and imprisoned the pastor, charging him with deliberate and malicious acts against another religion, while failing to investigate the assaults committed against him.

Such events are becoming the norm among the country’s more than 1.3 billion citizens.

Earlier this year, a Christian pastor was allegedly assaulted, tied up and forced to chant a Hindu prayer. In December, festive Christmas celebrations were disrupted, and statues of Jesus were smashed. Around the same time, a Catholic school was vandalized by a large mob while students were inside taking exams. On Maundy Thursday, a mob confronted dozens of worshippers gathered at a church. All suspected Christians were detained by police and then arrested.

As the world’s largest democracy, India might be expected to be a bastion of liberty, including the freedom to worship. But religious extremism is leading to a dire situation for followers of Jesus there.

Ranked No. 10 on Open Doors’ 2022 World Watch List, India has emerged as one of the most dangerous places for Christians to practice their faith in just a few short years. America and the rest of the free world must find a way to turn the tide of hate in India, demanding an end to the vicious attacks on Christians and other religious minorities.

The driving force behind the groundswell of Christian persecution in India is Hindutva, an extremist strain of Hinduism that disregards India’s religious minorities, claiming they aren’t true Indians because they have allegiances that lie outside of the country’s majority religion. A Pew survey found last year that although most Hindus say they are tolerant of other faiths, 64% surveyed say it’s important to be Hindu in order to be “truly Indian.”

New data reported by Open Doors USA, the organization that I lead, shows that in 2021 eight Indian states recorded 50 or more violent acts of persecution committed against Christians. Eight additional states logged between 15 and 49 documented attacks. In total, Open Doors has recorded more than 500 attacks, and our working assumption is that there are many that have gone unreported. 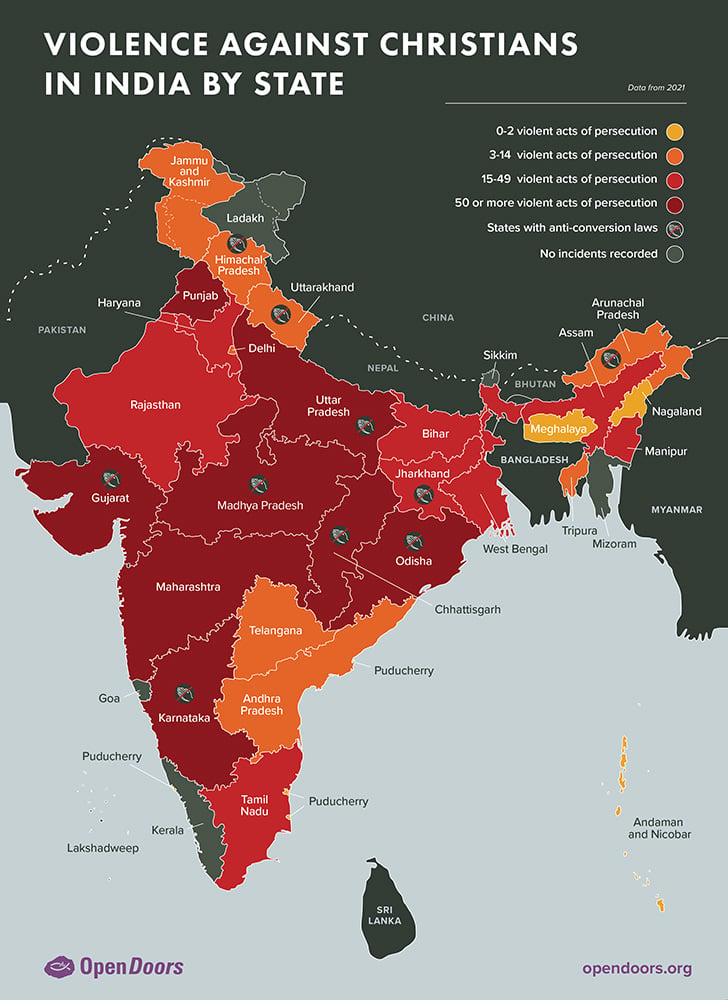 “Violence Against Christians in India by State” Graphic courtesy of OpenDoors

Why does the Indian government tolerate such blatant bigotry and faith-based violence within its borders? After all, religious freedom is enshrined in Article 25 of India’s Constitution, which states that “all persons are equally entitled to freedom of conscience and the right freely to profess, practice and propagate religion.”

Yet, at a June 2 news conference held by the U.S. State Department to introduce the 2021 International Religious Freedom Report, Secretary of State Antony Blinken specifically singled out India for “rising attacks on people in places of worship.”

Part of the situation can be explained by demographics. Christians only make up about 2% of India’s population, which means they lack the numbers necessary to effectively shape public policy and demand accountability for treating Christian practice as a crime.

Sustained international pressure from countries such as America could tip the scale in favor of freedom.

While Blinken’s public statements are a good start, much more is needed. The Biden administration needs to call on the Indian government to protect Christians and other religious minorities, especially their houses of worship and other vulnerable targets. We must require that Prime Minister Narendra Modi’s administration hold state officials and local police forces accountable for faith-related acts of violence and discrimination. And we need to prayerfully stand by our Indian brothers and sisters and let them know they are not alone.

RELATED: Human rights is on Blinken’s agenda in India. Can he make it stick?

The world’s largest democracy can only be successful when the tenets of its constitution — and the rights of citizens of all religions — are carefully and consistently upheld.

(David Curry is the president and CEO of Open Doors USA, an organization that advocates on behalf of those who are persecuted for their Christian faith throughout the world. For nearly a decade, he has provided leadership to Open Doors in its mission to raise awareness and support for those who endure extreme restrictions and, in some cases, horrific violence for practicing their faith. For more than 65 years, Open Doors has worked in the world’s most oppressive regions, empowering and equipping persecuted Christians in more than 60 countries by providing Bibles, training and programs to help those who have been marginalized for their faith. Open Doors publishes the World Watch List, an annual report on the 50 countries where it is most difficult to live as a Christian.)

Thousands march in Bangladesh over comments about Islam