JERUSALEM (RNS) — Shmuli looks outside the windows of his cellular phone store fearfully. He pulls at his long beard and swaying sidelocks. “Please don’t take my picture,” he begs. “Don’t talk loud.”

Shmuli (not his real name) has reason to be fearful. Several stores that sell smartphones and other digital technology near Mea She’arim, Jerusalem’s largest ultra-Orthodox neighborhood, have been trashed. Customers have been assaulted and riots have broken out in nearby streets.

Smartphones have become a volatile issue in the Haredi, or ultra-Orthodox, community since April, when Israel’s communications minister made it easier for Haredi to use smartphones without the knowledge of their rabbis, raising tensions within the Haredi community and between them and the rest of Israeli society.

RELATED: How 5G caused a feud between a small Christian school and T-Mobile

Haredi Jews make up 12.6% of Israel’s population, or 16% of Israeli Jews, and are one of the country’s fastest-growing communities. And though the term actually refers to several diverse sects and denominations, all Haredim are united in their adherence to Jewish law in all aspects of their lives and their utter rejection of Western sensibilities. Rabbis learned in the law provide rulings on everything from modesty requirements for women to personal health to marital relations.

The Haredim regard themselves as upholding authentic Judaism, and most live in tightly knit communities — a lifestyle some refer to as a “ghetto by choice.” Surrounded by “walls of holiness,” they avoid the contaminating modern influences. Haredi schools focus on religious studies, and most skip core subjects such as English, science or math, leaving their graduates with few options in the job market. Encouraged to continue their religious studies, few Haredi men are wage-earners; those that are tend to work within the community.

Having created Haredi newspapers and magazines, their rabbis forbid neighborhood stores from selling secular newspapers. When television was introduced into Israel in 1965, the rabbis banned the “evil box” from adherents’ homes. Today, data shows, fewer than half of Haredi households own a television. 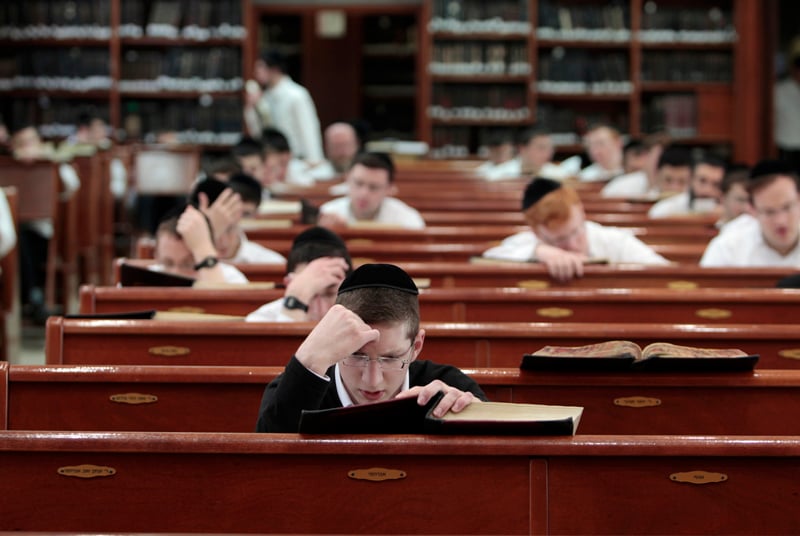 But digital communications, a greater threat to the cultural walls, are of more concern to the rabbis. Not only do digital tools offer access to inappropriate content, they open the way to chat groups and apps such as WhatsApp where Haredi can criticize the rabbis and even turn to lay sources of authority.

Rabbinical bans on the computer and the internet have been less successful than the ban against television or secular press. Initially the rabbis completely banned the internet, but as the need for it in daily living and livelihoods increased, they allowed for filtered internet for home computers.

But the rabbis drew the line at smartphones. They organized the Rabbinical Committee for Communications, which, together with Israel’s three major cellular providers, created the “kosher” telephone — a stripped-down phone that blocks messaging, video, radio and internet.

The committee and the cellphone providers also created a dedicated set of numbers with their own area code, making it immediately obvious if a call is coming from an unsupervised device.

The committee blocked phone sex services — but also government welfare agencies, support centers for sexual and domestic violence (which the rabbis prefer to handle within the community) and secular organizations that assist people trying to leave the community.

When a change to telecommunications law in 2007 required Israeli cellphone providers to allow their customers to move between the companies while retaining the same personal phone number, further agreements exempted the kosher phone numbers.

The rabbis found other ways to support their bans. Posters on the walls of Haredi neighborhoods warn about the heavy spiritual price that comes with a nonkosher phone. Haredi media are not permitted to advertise products or services that direct consumers to secular phone numbers, and parents without an approved phone number cannot enroll their children in school. A man using an outside phone can’t be counted for a minyan — one of the 10 men needed for public worship. The children of families using smartphones are shunned for a shidduch (arranged marriage).

Officially, the campaign worked, and most Haredim use kosher phones, although specific data is not available. But others avoided the social pressure by simply holding two phones — one for use within the community, one for everything else.

Dovid, 58, a Haredi man standing near Shmuli’s store who refused to give his full name, said: “I’m a real estate agent in the Haredi community. Of course I observe and revere my rabbis, but I can’t function in my work without a smartphone. That’s just the way it is in the modern world, unfortunately.” 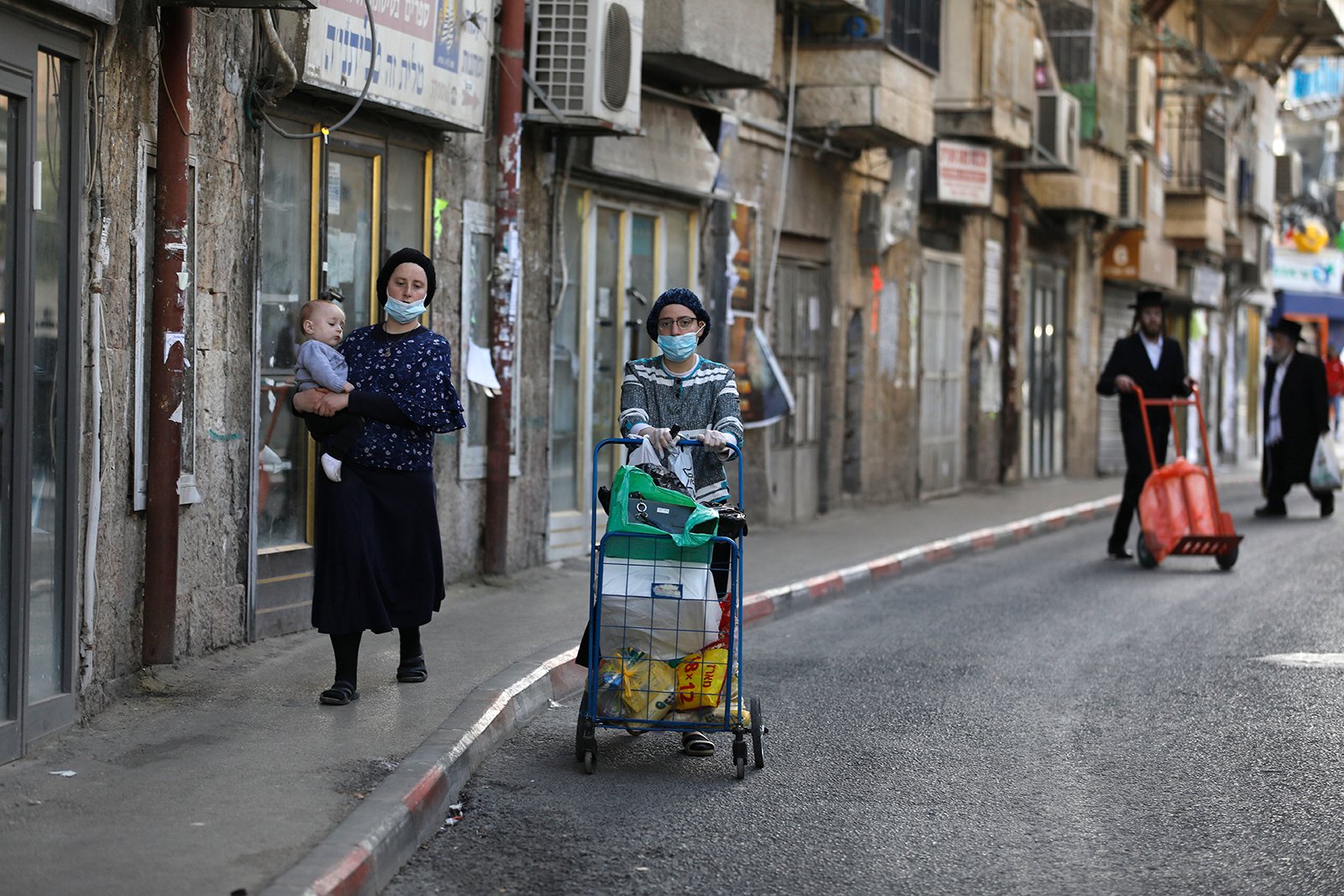 Ultra-Orthodox women are often the primary breadwinners in their families. (Photo by Menachem Kahana/AFP via Getty Images)

Women have complained about being deprived of hotlines for domestic and sexual abuse. “I am a Haredi woman,” said Shlomit, 38, the mother of eight children. Shopping for groceries near Shmuli’s store, she, too, refused to give her full name, for fear of shaming. “I know the rabbis don’t want to admit that there are problems like violence in our community, but there are. I accept the rabbis’ decisions in most cases, but I know that many women are holding on to two phones.”

Esty Shushan, a Haredi social activist and entrepreneur, and the founder and CEO of Nivcharot, a feminist-Haredi organization, agrees that emergency numbers should not be blocked but argues against widespread smartphone use. “I use a smartphone,” she said. “I wish I didn’t have to. It is one more way that technology is taking over our lives and stealing time and attention, not just for Haredim, but of everyone. There is something very beautiful and meaningful that our community seeks to live a simpler, more meaningful life, dedicated to values and belief.”

Israel’s most recent government coalition, which will remain in power, likely, until fall elections, did not include Haredi parties and it ended the Orthodox monopoly over several religious matters. In April, the current communications minister, Yoaz Hendel, adopted regulations allowing transfers from the distinct kosher phone numbers to nonrestricted providers. The reform will take effect July 31.

“Communications Minister Yoaz Hendel is trying to harm the lifestyle of the ultra-Orthodox public,” charged the head of the Haredi United Torah Judaism party.

Others went further. “Shmad,” wailed one rabbi, using an emotion-laden word that refers to decrees by foreign rulers to force Jews to abandon their religion.

“This is worse than the Holocaust,” cried another.

The rabbis alleged that children would be corrupted by pornography and other unholy content.

In an interview with The Jerusalem Post, Hendel declared that his decision is “about the character of Israel as a Jewish and democratic state. We have to agree there are no autonomies. The kosher phones are a kind of monopoly, outside of law and order. I cannot accept … that there is a monopoly of Judaism that only belongs to the haredi community.”

Shlomo Fischer, who teaches sociology at Hebrew and Ben Gurion universities and is founding executive director of Yesodot, a think tank that advances education for democracy, claimed the Haredi outcry has nothing to do with content. “Chat rooms and control of information is power. The rabbis are afraid of losing their authority,” he said.

With increased communication with the “outside” world and better digital skills, Haredim will also be able to work at better jobs and be less dependent on the community, Fisher added.

The rabbis’ authority has been slipping since the beginning of the COVID-19 pandemic, Fisher said, when they opposed social distancing and insisted on keeping schools open. The Haredi community suffered some of the highest rates in Israel due to COVID-19 mortality.

In response to the growing disobedience, self-appointed vigilantes have taken to enforcing the smartphone ban through violence. Moishe, who appears to be in his late 20s, was lurking near Shmuli’s store. “Get out of our neighborhood,” he screamed at a journalist. “You can report on us. The police can arrest us. But we won’t allow these impure abominations to destroy our holy lives.”

Yedidia Stern, president of the Jewish People Policy Institute, a Jerusalem think tank, the cellphone controversy is a battle in Israel’s culture war. “The Haredim would like to see Israel become a religious state, but this conflicts with the visions of seculars, religious and Arabs,” said Stern. “This is the background to the campaign against the mobile phones. This will not be resolved in the near future.”

How a Peruvian farmer converted to Judaism and started a movement