(RNS) — Justin Bieber is incentivizing Beliebers to take action on social justice during his Justice World Tour, which launched in San Diego on Friday (Feb. 18). His “Justice in Action” initiative promises prizes, including free concert tickets and a Paris trip, for supporting religious and nonreligious organizations alike.

“Join Justin Bieber in taking action for your chance to win exclusive prizes from the Justice World Tour Like VIP tickets, a trip to meet Justin in Paris, and more,” an announcement on Bieber’s website says.

Through Propeller, a company that leverages social influence to support nonprofits, fans can donate to any of the 18 participating groups, whose efforts range from climate advocacy to criminal justice reform to opposing anti-Asian racism. Fans earn points by signing petitions, volunteering or registering to vote — more points means more opportunities to win.

One partner is the Poor People’s Campaign, a faith-based anti-poverty initiative inspired by the Rev. Martin Luther King Jr.’s campaign in the 1960s.

“Thank you, @JustinBieber, for lifting up the #PoorPeoplesCampaign @UniteThePoor. We invite you & Hailey Bieber to join us June 18 in Washington, D.C.,” tweeted the Rev. William J. Barber II, co-chair of the campaign. Another partner organization, Live Free USA, a criminal justice reform organization, is holding “justice and belonging” training sessions ahead of the concert dates in cities where Bieber is scheduled to perform.

“We are excited to have this opportunity to connect with the Justin Bieber fan base,” Pastor Mike McBride, Live Free’s national director, told Religion News Service, saying the trainings involve local leaders addressing the need to reduce gun violence and to abolish the death penalty.

The first training, held in Las Vegas on Friday, included about 50 people of different religious and racial/ethnic backgrounds sharing their personal experiences and seeking empathy in their different situations. They discussed contacting elected officials to make changes to help poor people, such as with improved access to housing. About a dozen people attended a clergy training the next day that focused on voter mobilization for the fall elections.

McBride said the group had already been planning trainings around the country and when its leaders were contacted by Bieber’s organization, decided to offer them at the tour stops. The expanded training is supported by Levi Strauss & Co., according to McBride, who said he did not have ethical qualms about the incentives offered by the Bieber tour for those attending the Live Free trainings.

“Our world is often so polarized and sometimes people need an extra nudge to lean into something that they perhaps would not do on their own,” he said. “I think we need people that can push folks into spaces of difference but make sure those spaces are curated to be safe and a place of learning and not division.”

McBride said Live Free and other organizations are suggesting other local actions concertgoers can take, such as an online form related to San Diego that reads “Sign this petition with LIVE FREE to support criminal justice reforms in San Diego by eliminating gang enhancements, which are excessive and punitive sentencing for individuals suspected of criminal activity.” 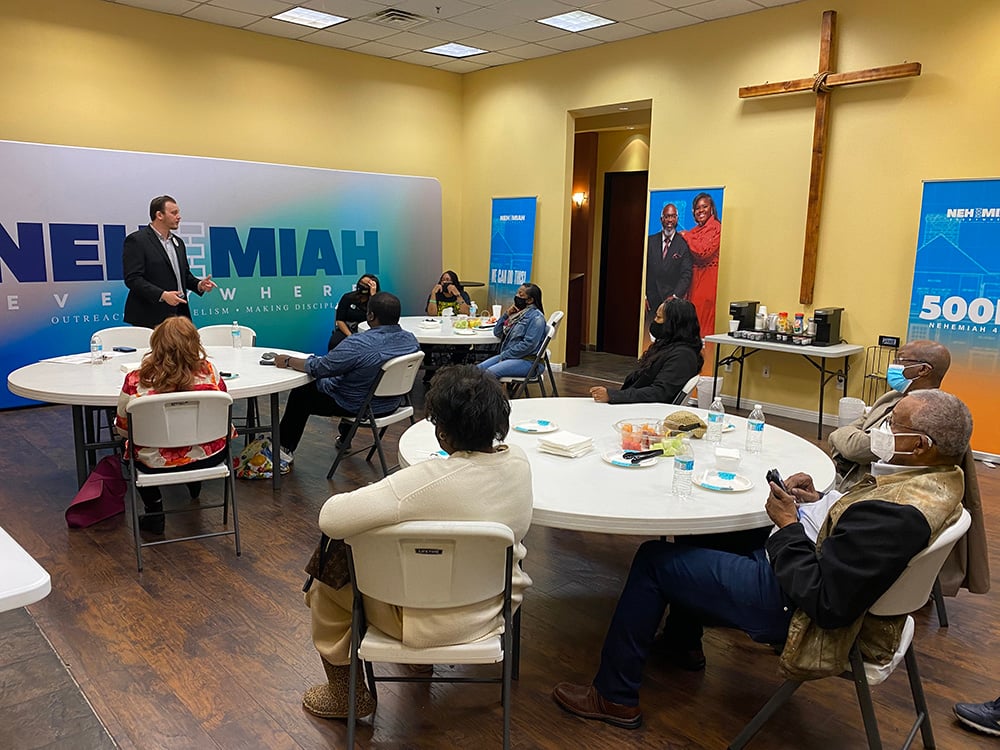 One day after the tour’s San Diego launch, Bieber had to postpone concert dates in Las Vegas and Glendale, Arizona, on Sunday and Tuesday, respectively, due to “positive COVID results within the Justice Tour family,” according to a Justice Tour Instagram post. The New York Times later reported Bieber had tested positive for the virus. The 90-date tour is scheduled to take place in more than 20 countries.

Bieber, who has attended evangelical megachurches in recent years, first announced partnerships with the Poor People’s Campaign and others in March 2021, when his album “Justice” was released. Bieber initially offered floor tickets, merchandise and a signed guitar in exchange for supporting the listed organizations.

“At best, these clips have the hollow, non-committal feel of a brand-sponsored Black History Month tweet, a gesture best left unmade,” one Rolling Stones review said. “At worst they co-opt and trivialize the message of the man they profess to honor.”

But the controversy hasn’t discouraged fans, who seem to appreciate Bieber’s exploration of faith and activism. Last year, fans embraced “Freedom,” Bieber’s surprise Easter EP and most explicitly religious project to date. This week, his song “Ghost,” off the “Justice” album, became the star’s 10th song to earn the top spot on Billboard’s Pop Airway chart.