(RNS) — With Roe v. Wade overturned, white evangelicals support restricting abortion, including through so-called heartbeat laws that ban abortion as early as six weeks into a pregnancy, according to a new survey.

Almost all want to see abortion banned after 15 weeks.

More than half said providing an abortion should be a felony.

These views put them at odds with Americans from every other faith background, according to new data from the Washington, D.C.-based Public Religion Research Institute. The survey found Catholic, Black Protestant, non-Christian and unaffiliated Americans are more supportive of abortion rights than white evangelicals, said Melissa Deckman, CEO of PRRI.

Deckman said that overall, support for legal abortion had risen in the past decade. In 2010, PRRI found that 55% of Americans said abortion should be legal in most or all cases. Today, she said, that number has jumped to two-thirds. 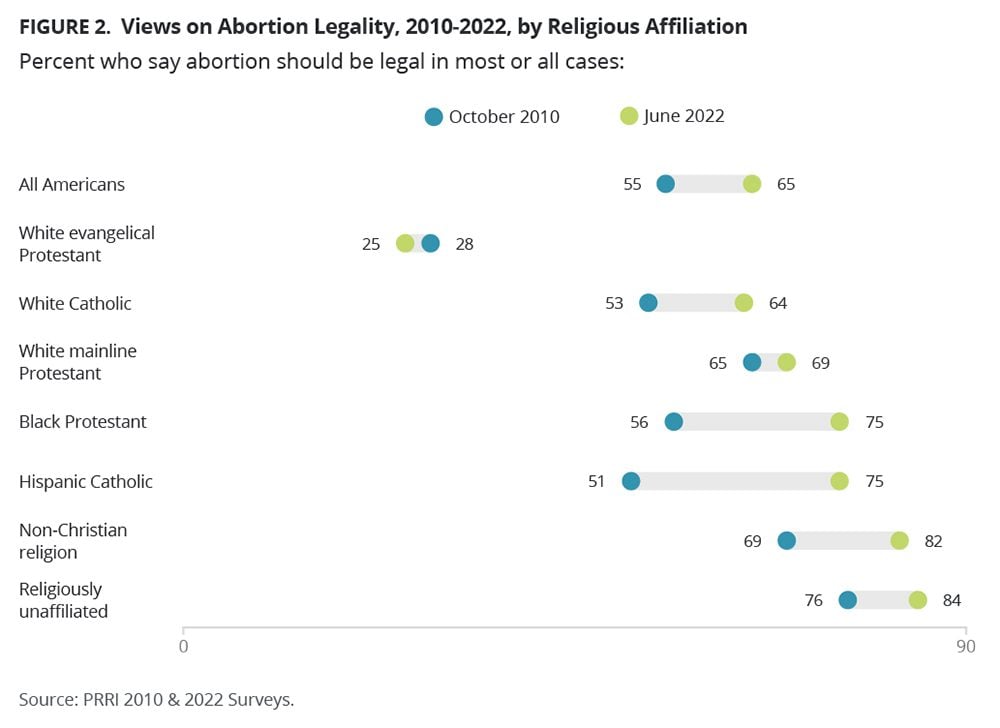 “Americans have become more supportive of abortion rights in the past decade,” she said. “I think part of that is driven by the fact that we have more religiously unaffiliated Americans.”

The survey of 2,038 Americans, which used the Ipsos online panel, was conducted from June 24 to June 26 and was put in the field right after the announcement of the Dobbs decision, which overturned Roe. The idea was to get an immediate response from the public.

“Having the survey in the field immediately after the court released the Dobbs decision was by design, allowing us to evaluate the decision’s impact on public attitudes in near-real-time,” said a PRRI spokesman in an email.

Several states have begun to enact so-called trigger laws to restrict abortion in the wake of the Dobbs decision. Those laws, in states like Texas, Tennessee and Oklahoma, included provisions to put them in effect if Roe was overturned. The Dobbs decision put abortion regulation back into the hands of states — and, for some states seeking to enact new laws, into the hands of voters.

Among survey respondents, white evangelicals support more restrictions than any other religious group. Most said abortion should be banned early in pregnancy, with 81% saying they would support laws banning abortion after 15 weeks. Seven in 10 said they support bans on abortion as soon as a heartbeat can be detected, which is usually around six weeks.

The survey found less support among white evangelicals for other restrictions. Less than half (43%) said it should be illegal to cross state lines to obtain an abortion. Just over a third (38%) said seeking an abortion should be a felony.

By contrast, Americans from most other faith groups surveyed opposed laws that restrict abortion. More than 6 in 10 white Catholics, white Mainline Protestants and religiously unaffiliated Americans opposed heartbeat bans on abortion. They also opposed making abortion pills illegal, including 71% of those from non-Christian faiths and 83% of the unaffiliated. Most faith groups also opposed laws to make seeking an abortion a crime, making it a felony to provide an abortion or making it illegal to cross state lines to obtain an abortion. 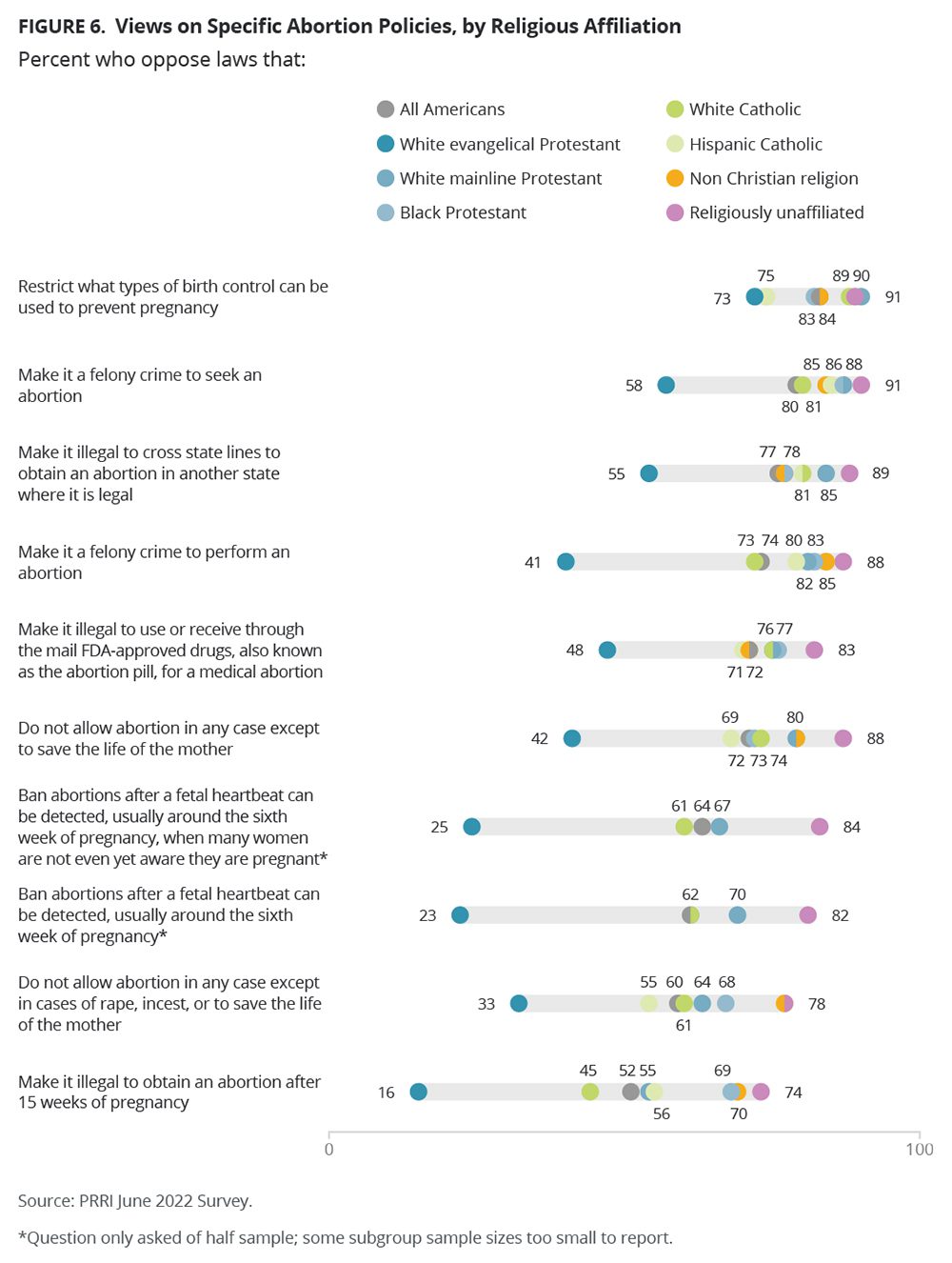 “There is considerably more variation among religious groups on 15-week bans,” according to PRRI. “Majorities of religiously unaffiliated Americans (74%), non-Christian religious Americans (70%), Black Protestants (69%), Hispanic Catholics (56%) and white mainline Protestants (55%) oppose these laws. Less than half of white Catholics (45%) and only 16% of white evangelical Protestants oppose them.”

One thing that nearly all religious groups agree on is birth control: Few support any restrictions — from 24% of white evangelicals to 7% of the unaffiliated.

Pew Research has also found white evangelicals to be outliers when it comes to abortion. A Pew survey released before the Dobbs decision found that 74% say abortion should be illegal in most or all cases. That survey found more than 8 in 10 of the unaffiliated, which Pew refers to as “nones,” support legal abortion in most or all cases.

The Pew survey did find that most religious groups are open to some restrictions on abortion.

“One commonality across these groups is that sizable numbers in all of them see the issue of abortion in shades of gray,” according to Pew. “Large majorities in every group — ranging from 63% of religious ‘nones’ to 78% of white non-evangelical Protestants — say abortion should be legal in some circumstances and illegal in others.”

In recent years, a group of abortion foes, known as “abolitionists,” have called for complete bans on abortion without exception. They also call for criminal penalties for women who have abortions, a position recently advocated by Southern Baptist leader Al Mohler, head of one of the nation’s largest seminaries. Anti-abortion protesters hold signs during a demonstration outside of the U.S. Supreme Court in Washington, Sunday, May 8, 2022. (AP Photo/Amanda Andrade-Rhoades)

However, few Americans, regardless of religious belief, say women should be penalized for seeking an abortion, according to Pew. The most likely group is white evangelicals, a quarter of whom said women who have an abortion should face jail time, compared to 14% of Catholics and 18% percent of Protestants. Overall, 14% of Americans would support jail time, while 16% would support fines or community service as a penalty.

Abortion has also increasingly become a make-or-break issue for voters, said Beckman. The recent PRRI survey found that a third of Americans will only vote for candidates who share their views on abortion. That includes 40% of the unaffiliated and 37% of white evangelicals. She said Catholics and non-evangelical Protestants have become more likely to support only candidates who share their views.

“Historically, those individuals who oppose abortion rights have always been much more likely to say they will only vote for someone who shares that view,” she said. “We’ve known that for decades. But all of a sudden, nationally we’re finding that with Roe’s reversal, that in fact, those who are supportive of abortion rights are now saying this is key to their vote decision.”

RELATED: For red-state clergy who back abortion rights, losing Roe is a call to action