Most TikTok users hadn’t even been born when Shabazz joined the military 28 years ago and are of a generation with few ties to military service — some 71% of young Americans between 17 and 24 are thought to be ineligible to serve due to health or other issues, according to a recent report.

Shabazz’s TikTok account includes a mix of his weightlifting exploits peppered with Quranic and biblical messages. Aphorisms abound. “If your ship doesn’t come in, swim out to meet it” appears to be one of his favorites. As a chaplain, Shabazz is used to handing out nuggets of advice and wisdom to troubled soldiers — the sort of counsel a younger, more troubled Shabazz could have benefitted from.

Not long after converting to Islam — facing discrimination from other soldiers, disappointment from his Lutheran family and with more than one citation for insubordination on his record — Shabazz was ready to quit the military.

But a chance encounter with a Christian army chaplain not only convinced him to stay in the military but to pursue chaplaincy himself.

“Honestly, it was like a revelation from God,” Shabazz told the Army News Service. “When it hit my ears, I knew that was what I was going to do in life. It was incredible.”

Nearly three decades later, with his 2018 promotion to colonel, Shabazz is the highest-ranking Muslim chaplain in the U.S. Military. He serves as command chaplain for U.S. Army Central, the three-star command responsible for land operations in the Middle East, according to Army Times.

RELATED: Even Congress can agree that we need to stop Uyghur genocide. Why can’t Elon Musk?

As a child, Shabazz was molested by a family friend — an experience, he said, that put him in an emotional tailspin and left him an angry young man. He spent 8th grade in special education. He failed 9th grade and 12th grade. 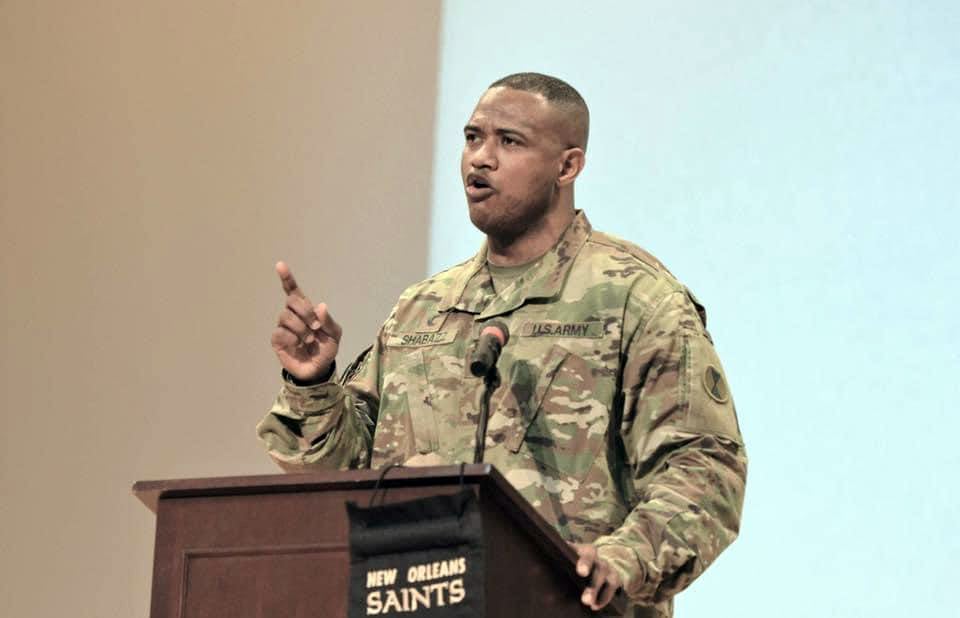 After completing summer school, he enrolled at Jarvis Christian College in Texas, a historically Black school affiliated with the Disciples of Christ. There he played on the basketball team and studied with the goal of becoming a minister. But he fell in with the wrong crowd, he has said, began drinking and partying and often found himself in violent altercations. It was during one of these drunken brawls that he was assaulted, beaten with a shovel and shot in the back.

He survived thanks to a medical evacuation but decided to table his studies. He went back to Louisiana, his home state. The only job he could find was as a janitor at K-mart. With few options, like many young men before him, Shabazz joined the military.

It was there he first read “The Autobiography of Malcolm X,” also absorbing the movie starring Denzel Washington when it was released in 1992.

“I never considered myself a smart person, and I found a lot to inspire me in his story; Malcolm X had an 8th-grade education but educated himself by reading the dictionary,” said Shabazz, “I hadn’t seen a strong African-American male like that in my community. I wanted to be educated and to stand for something bigger than myself. So I decided to become like Malcolm and even took the last name Shabazz in imitation of him.”

But his conversion made him the focus of discrimination in the military. It was a lot to handle for a young soldier in the 1990s, and he fell into old habits. He faced disciplinary action for insubordination. He contemplated suicide. It was during that time when he met the Christian chaplain.

“I was getting ready to deploy, possibly to war, and I was crying, and I saw the chaplain, and I said to myself, ‘If there is a God, please don’t have the chaplain come over and talk to me,’” Shabazz recalled. “But God had other plans.”

It was this chaplain who, after talking to Shabazz, encouraged him to pursue a role as a Muslim chaplain. He received a master of divinity from Hartford Seminary, now Hartford University for Religion and Peace, one of few places offering programs for Islamic chaplaincy. Shabazz was commissioned as a chaplain in 1998, having studied Arabic in Jordan along the way. He later also obtained a M.A. in interfaith dialogue from Claremont Lincoln University.

With his seniority as a colonel, Shabazz is now responsible for tens of thousands of soldiers and oversees more junior chaplains. Regardless of whether a chaplain wears a Christian cross, a Muslim crescent, a Jewish Star of David or another symbol on his uniform, he has to be ready to minister to soldiers of all faiths.

Still, in order to better understand Christian soldiers who make up the majority of the military, Shabazz continued his study of that faith as well. He eventually obtained a doctorate in Christian theology and religious vocations from North Texas Theological Seminary. He believes his experience as a practicing member of both religions has helped to make him a better chaplain.

“It’s easier today to be a Muslim soldier in the army than when I began. There are a lot more Muslims represented in the military. Beards are allowed now in the army, as are hijabs. Arabic classes are now available. Friday service is more of an established thing. Some bases have mosques and even more have makeshift musalahs for prayer,” he said, using the Arabic term for a pop-up prayer area. 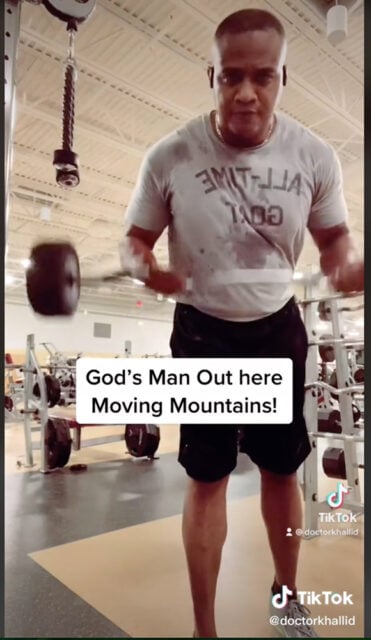 Shabazz’s own unlikely success on social media speaks about how times have changed. The former college basketball player spends long hours at the gym, which offer him a chance to meet soldiers and inspire them in an informal setting.

It was at a gym where other soldiers, surprised to find their chaplain in the gym, encouraged him to join TikTok.

“Last year when I transferred from the Air Force Reserve to active duty in the Army, I felt overwhelmed and scared,” said soldier Andy M Niang,” So I reached out to Col. Shabazz, and his words of encouragement and prayers made me go through Army basic training like a beast. I dropped from 227 lbs. to 189 lbs. in weight and ended up an honor graduate.”

He believes it will probably be 25 years before there is a Muslim general in the U.S. military.

He says it will take a special someone who has a good relationship with senior brass — like that between former Brooklyn Dodgers executive Branch Rickey and Jackie Robinson, which allowed Robinson to become the first African-American Major League Baseball player in decades.

“I love ’42’, the movie about Jackie Robinson. I watch it sometimes when I need inspiration when I am facing obstacles or discrimination due to my faith,” Shabazz said.