(The Conversation) — Thich Nhat Hanh, the monk who popularized mindfulness in the West, died in the Tu Hieu Temple in Hue, Vietnam, on Jan. 21, 2022. He was 95.

In 2014, Thich Nhat Hanh suffered a stroke. Since then he was unable to speak or continue his teaching. In October 2018 he expressed his wish, using gestures, to return to the temple in Vietnam where he had been ordained as a young monk. Devotees from many parts of the world had continued to visit him at the temple. 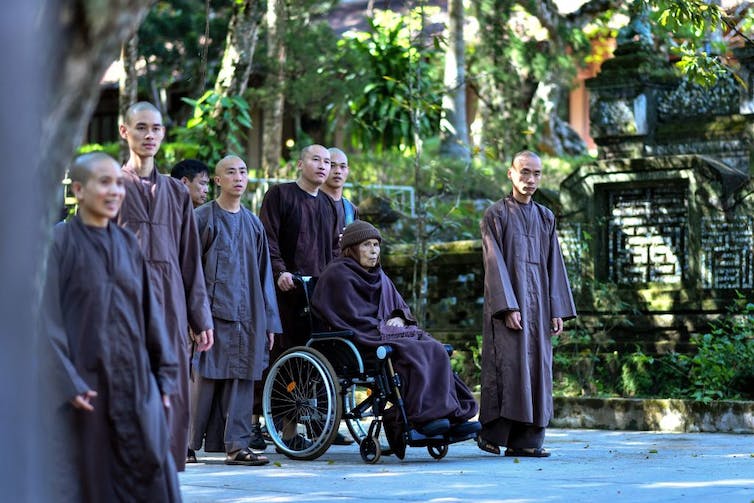 Thich Nhat Hanh in a wheelchair at the Tu Hieu pagoda in Hue, Vietnam, in 2018.
Manan Vatsyayana/AFP via Getty Images

As a scholar of the contemporary practices of Buddhist meditation, I have studied his simple yet profound teachings, which combine mindfulness along with social change, and which I believe will continue to have an impact around the world.

In the 1960s, Thich Nhat Hanh played an active role promoting peace during the years of war in Vietnam. He was in his mid-20s when he became active in efforts to revitalize Vietnamese Buddhism for peace efforts.

Over the next few years, Thich Nhat Hanh set up a number of organizations based on Buddhist principles of nonviolence and compassion. His School of Youth and Social Service, a grassroots relief organization, consisted of 10,000 volunteers and social workers offering aid to war-torn villages, rebuilding schools and establishing medical centers.

He also established the Order of Interbeing, a community of monastics and lay Buddhists who made a commitment to compassionate action and supported war victims. In addition, he founded a Buddhist university, a publishing house and a peace activist magazine as ways to spread the message of compassion.

In 1966, Thich Nhat Hanh traveled to the United States and Europe to appeal for peace in Vietnam.

In lectures delivered across many cities, he compellingly described the war’s devastation, spoke of the Vietnamese people’s wish for peace and appealed to the U.S. to cease its air offensive against Vietnam.

During his years in the U.S. he met Martin Luther King Jr., who nominated him for the Nobel Peace Prize in 1967.

However, because of his peace work and refusal to choose sides in his country’s civil war, both the communist and noncommunist governments banned him, forcing Thich Nhat Hanh to live in exile for over 40 years.

During these years, the emphasis of his message shifted from the immediacy of the Vietnam War to being present in the moment – an idea that has come to be called “mindfulness.”

Being aware of the present moment

Thich Nhat Hanh first started teaching mindfulness in the mid-1970s. The main vehicle for his early teachings was his books. In “The Miracle of Mindfulness,” for example, Thich Nhat Hanh gave simple instructions on how to apply mindfulness to daily life.

In his book
“You Are Here,” he urged people to pay attention to what they were experiencing in their body and mind at any given moment, and not dwell in the past or think of the future. His emphasis was on the awareness of the breath. He taught his readers to say internally, “I’m breathing in; this is an in-breath. I’m breathing out; this is an out-breath.” 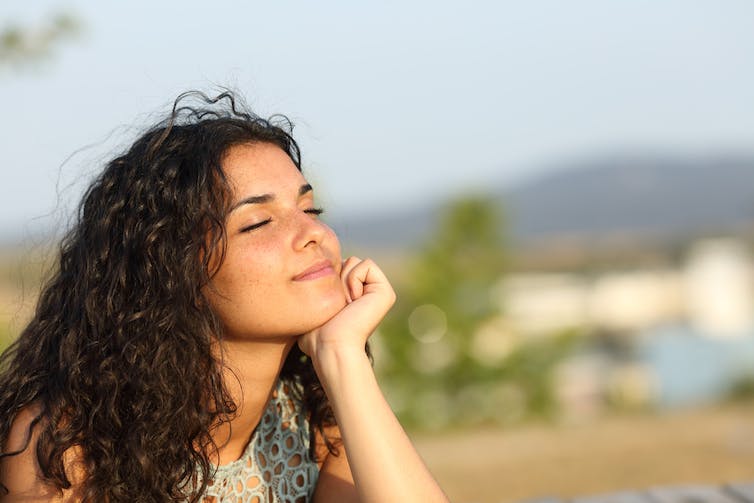 People interested in practicing meditation didn’t need to spend days at a meditation retreat or find a teacher. His teachings emphasized that mindfulness could be practiced anytime, even when doing routine chores.

Even doing the dishes, people could simply focus on the activity and be fully present. Peace, happiness, joy and true love, he said, could be found only in the present moment.

Hanh’s mindfulness practices don’t advocate disengagement with the world. Rather, in his view, the practice of mindfulness could lead one toward “compassionate action,” like practicing openness to others’ viewpoints and sharing material resources with those in need.

For Thich Nhat Hanh, however, mindfulness was not a means to a more productive day but a way of understanding “interbeing,” the connection and codependence of everyone and everything. In a documentary, “Walk With Me,” he illustrated interbeing in the following way:

A young girl asks him how to deal with the grief of her recently deceased dog. He instructs her to look into the sky and watch a cloud disappear. The cloud has not died but has become the rain and the tea in the teacup. Just as the cloud is alive in a new form, so is the dog. Being aware and mindful of the tea offers a reflection on the nature of reality. He believed this understanding could lead to more peace in the world.

Thich Nhat Hanh will have a lasting impact through the legacy of his teachings in over 100 books, 11 global practice centers, over 1,000 global lay communities and dozens of online community groups. The disciples closest to him – the 600 monks and nuns ordained in his Plum Village tradition, along with lay teachers – have been planning to continue their teacher’s legacy for some time.

They have been writing books, offering teachings and leading retreats for several decades now. In March 2020, the Thich Nhat Hanh Foundation, along with Lion’s Roar, hosted an online summit called “In the Footsteps of Thich Nhat Hanh” to make people aware of his teachings through the disciples he trained.

Although Thich Naht Hanh’s death will change the community, his practices for being aware in the present moment and creating peace will live on.

This is an updated version of a piece first published on March 18, 2019.

(Brooke Schedneck, Assistant Professor of Religious Studies, Rhodes College. The views expressed in this commentary do not necessarily reflect those of Religion News Service.)

In WWII, Japanese Americans’ faith came under suspicion and helped them survive their incarceration