(RNS) — A survey of nonreligious people reveals that women are more likely than others to encounter stigma and discrimination in nearly every area of their lives — social media, education, employment, the military and within their families — because of their beliefs.

The report, “Nonreligious Women in America,” released Tuesday (March 22), details the extent to which women conceal their nonreligious identities as a result of discrimination, as well as the isolation and stigma they face.

The research, based on a survey of nearly 34,000 nonreligious people in the United States, found that more than half (57.9%) of female respondents reported negative experiences with their families due to their nonreligious identity, compared with 52.2% of other participants.

Among female veterans, 52.5% reported negative experiences, compared with 45.4% of other participants. Nearly one quarter (24.4%) of all employed or recently employed nonreligious women also reported negative experiences at their jobs. Nearly half — 49.3% — mostly or always concealed their beliefs at work, compared with two-fifths (41.3%) of other respondents.

The negative attention women get is only matched by their invisibility, said Alison Gill, vice president for legal and policy for American Atheists. Even as the number of people of no faith continues to rise in the U.S., said Gill, “atheist and nonreligious women are too often overlooked in our society.”

Gill said nonreligious women “still too often face ridicule, negative stereotypes and marginalization with their families, in broader society, and even within atheist communities.”

“There continues to be stereotypes that all atheists are men,” Gill said.

That’s why American Atheists, a civil rights organization that works to achieve religious equality for all Americans, and the nonprofit Secular Woman teamed up to produce the new report “to shine a light on nonreligious women by examining their unique experiences, priorities and challenges,” Gill said.

Discrimination also varied by region, with 39.9% of nonreligious women living in the South reporting negative experiences in school, compared with 34.1% of those living in the Midwest, 28.1% in the West and 24.4% in the Northeast. 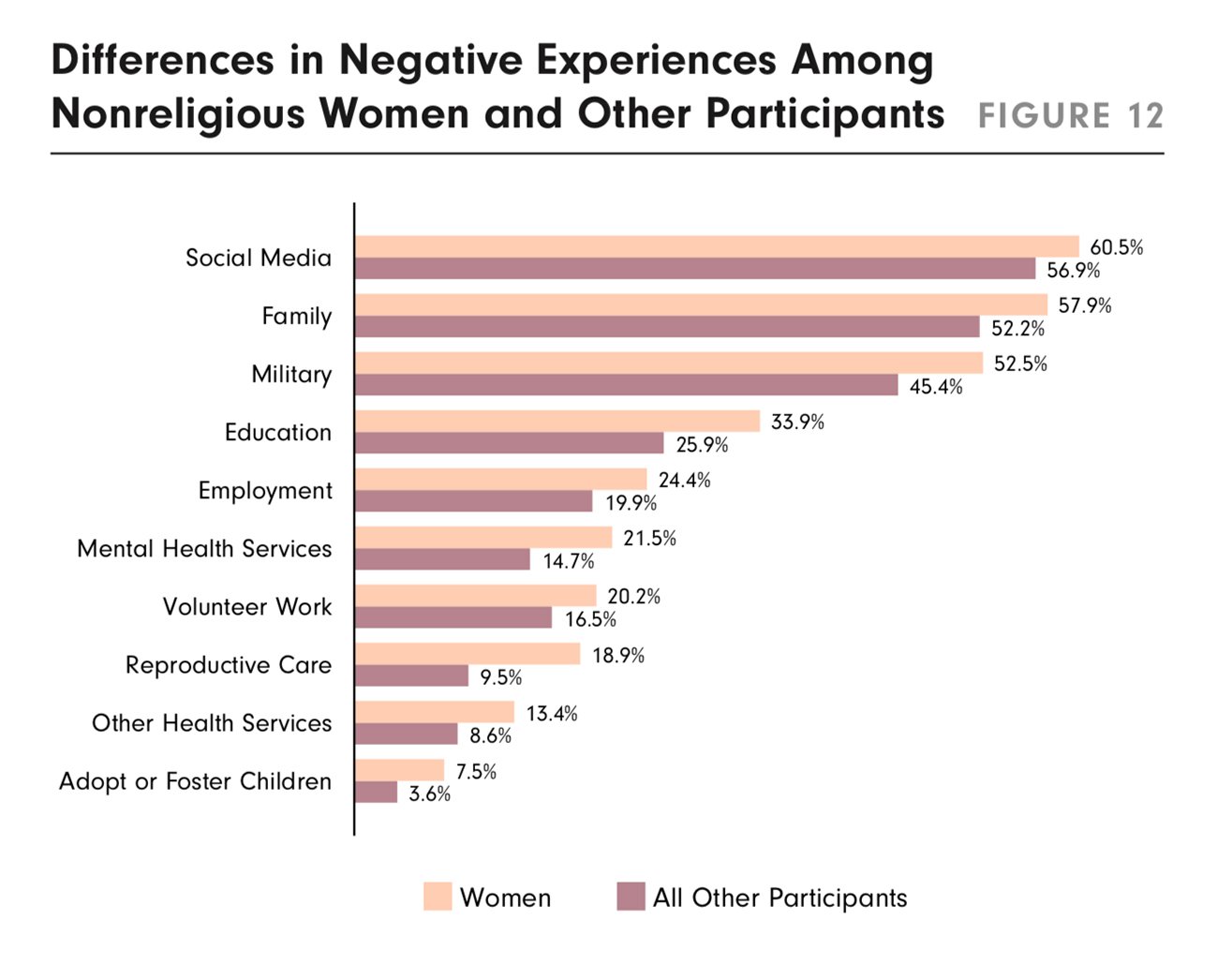 “There’s just a lack of awareness, generally, that nonreligious people do face discrimination and stigma based on their beliefs and that it is particularly much worse in some areas of the country than others,” Gill said.

The report follows one published in 2020 by American Atheists titled “Reality Check: Being Nonreligious in America,” which detailed the discrimination and stigma all nonreligious people face. The survey contacted 13,522 nonreligious women among the nearly 34,000 people who participated in the 2019 U.S. Secular Survey conducted by researchers at Strength in Numbers Consulting Group.

This new analysis focuses solely on the women who took part in that survey.

Nonreligious women were more than twice as likely to identify as bisexual than were other participants (16.7% vs. 7.6%).

The report found that nonreligious women were more likely than the other participants to consider access to abortion and contraception as a “very important” issue (93.4% vs. 81.5%).  They said the same of comprehensive and medically accurate sex education (90.8% vs. 81.9%), LGBTQ equality (88.8% vs. 76.8%) and protecting the environment against climate change (88.5% and 82.4%).

Women who had a negative event related to being nonreligious in their family were 83.5% more likely to experience depression than those who didn’t have such an experience.

Nonreligious women, the report showed, are more likely to seek the solace of local secular organizations. Membership in these groups, it said, can be an important protection against depression.

The report shed light on the mental health toll that women experience for their nonreligious beliefs. It’s particularly stark for Black nonreligious women, “who are often stereotyped as religious.”

The report notes that Black women with these experiences “had worse psychological outcomes,” as they were found to be 41.5% more likely to screen positive for depression than other women with negative family experiences.

Sikivu Hutchinson, an atheist activist and author who more than a decade ago founded Black Skeptics Los Angeles, said the report’s findings resonate.

“African American women have more of a burden and a stigma placed on them to be faith-based, to be religious, to be observant, and when we’re not … there’s a lot of backlash,” said Hutchinson.

She experienced it firsthand at a recent union meeting when she objected to another woman’s prayer during the virtual gathering. Hutchinson said she faced “immediate backlash.”

Hutchinson recognizes that many Black women seek support from faith-based resources when dealing with trauma or depression.

“They pray. They go to church. They check in with the pastor, and these are all things that are co-signed and endorsed and supported in dominant cultures in African American communities,” she said. “There are no meaningful explicit alternatives for those who are secular humanists or otherwise.”

She noted that many LGBTQ youth who were raised in Pentecostal, Catholic and other Christian denominations feel “stigma and oppression from family members because they’re queer, trans, gender nonconforming, or nonbinary.”

“You compound that with not adhering to Christianity, that’s a vicious cycle for a lot of young people,” Hutchinson said.